How to Calculate Shear Force Diagram (SFD) of a Simple Beam?

In this tutorial, we will look at calculating the shear force diagram of a simple beam. This is an important concept to understand, as shear force is something a beam will need to be checked for, for a safe design.

What is Shear Force?

Firstly, what is shear force? Shearing forces occur when a perpendicular force is applied to static material (in this case a beam). Think of a knife cutting through a carrot. Imagine the beam is the carrot and a point load is a knife. As the knife applies a downward force, it cuts (or shears) the carrot.

These forces occur along with numerous points of a beam, and it is important to determine where these shears are at the greatest points as this may be where a beam fails.

To calculate the shear forces of a beam, follow the following simple steps (as hand calculated by SkyCiv Beam Software). But first, a few things to note with this process:

Start with the far left side of the beam

If there is an upward force (i.e a support) then the SFD will start at this force above the x-axis. If there is a downward point load and no support then the shear force diagram will start as a negative at the value of the point load.

Move across the beam

As you come across loads, you simply add (or subtract) these loads from the value you already have, keeping a cumulative total.

It is much easier to understand when considering an example of how to calculate a Shear Force Diagram. So let’s consider the following example to calculate the shear force diagram of a beam:

After you calculate the reactions at the supports at A and B, start the Shear Force Diagram at the first value of the force acting on the beam. We take the sum of all vertical forces, which in this case, is just a +10kN due to the reaction at point A: 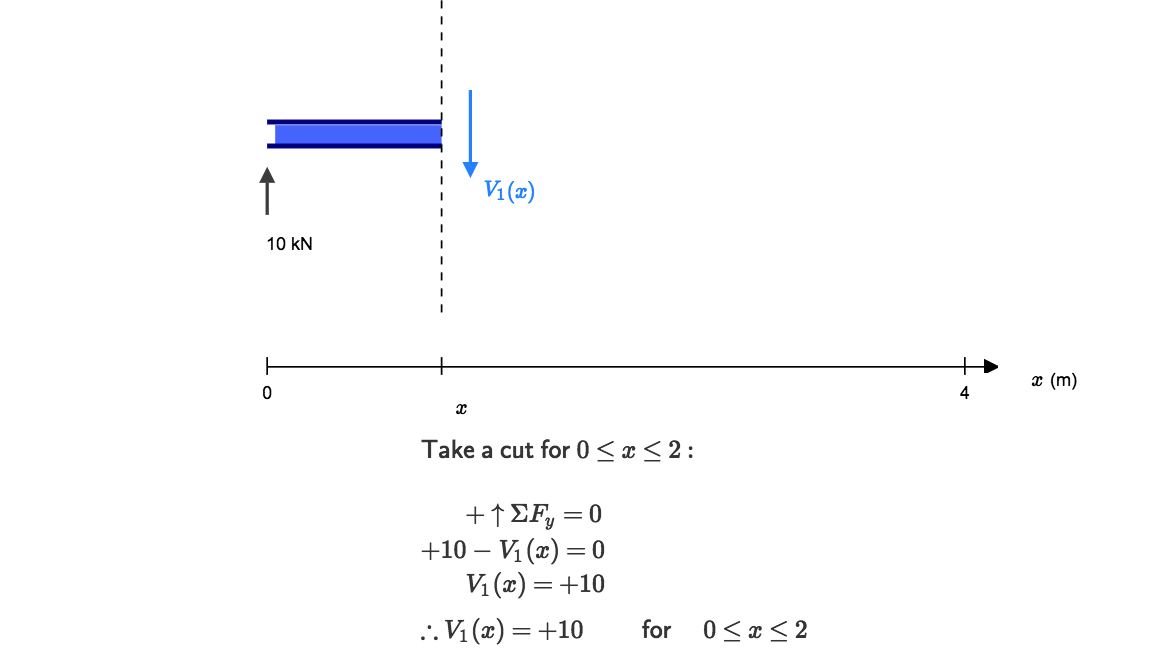 Keep moving across the beam, stopping at every load that acts on the beam. When you get to a load, add to the Shear Force Diagram by the amount of the force. In this case we have come to a negative 20kN force, so we will minus 20kN from the existing 10kN. i.e. 10kN – 20kN = -10kN. This step is based on a simple shear force formula (sum of vertical forces), which is shown under the following image: 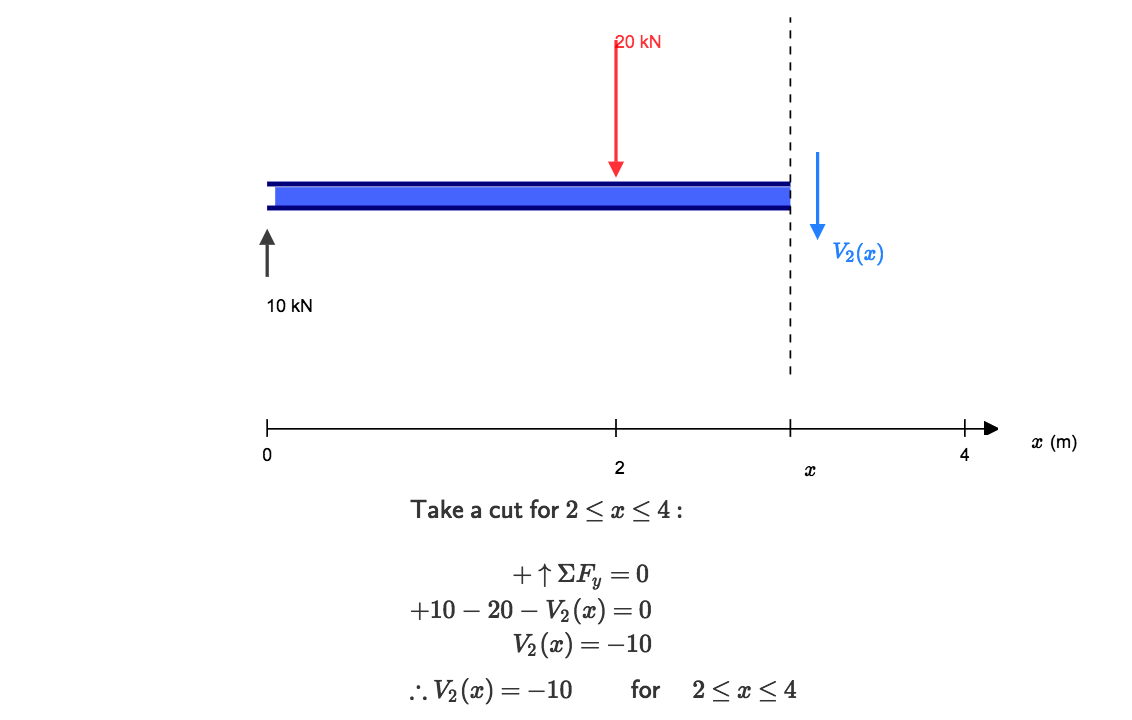 Moving across the beam again, we come to another force; a positive 10kN reaction at support B. Again, add this +10kN to the shear force diagram (which is currently at -10kN), this will bring us to a shear force of 0. Since we are at the end of the beam, we will go no further and we have our final Shear Force Diagram (SFD): 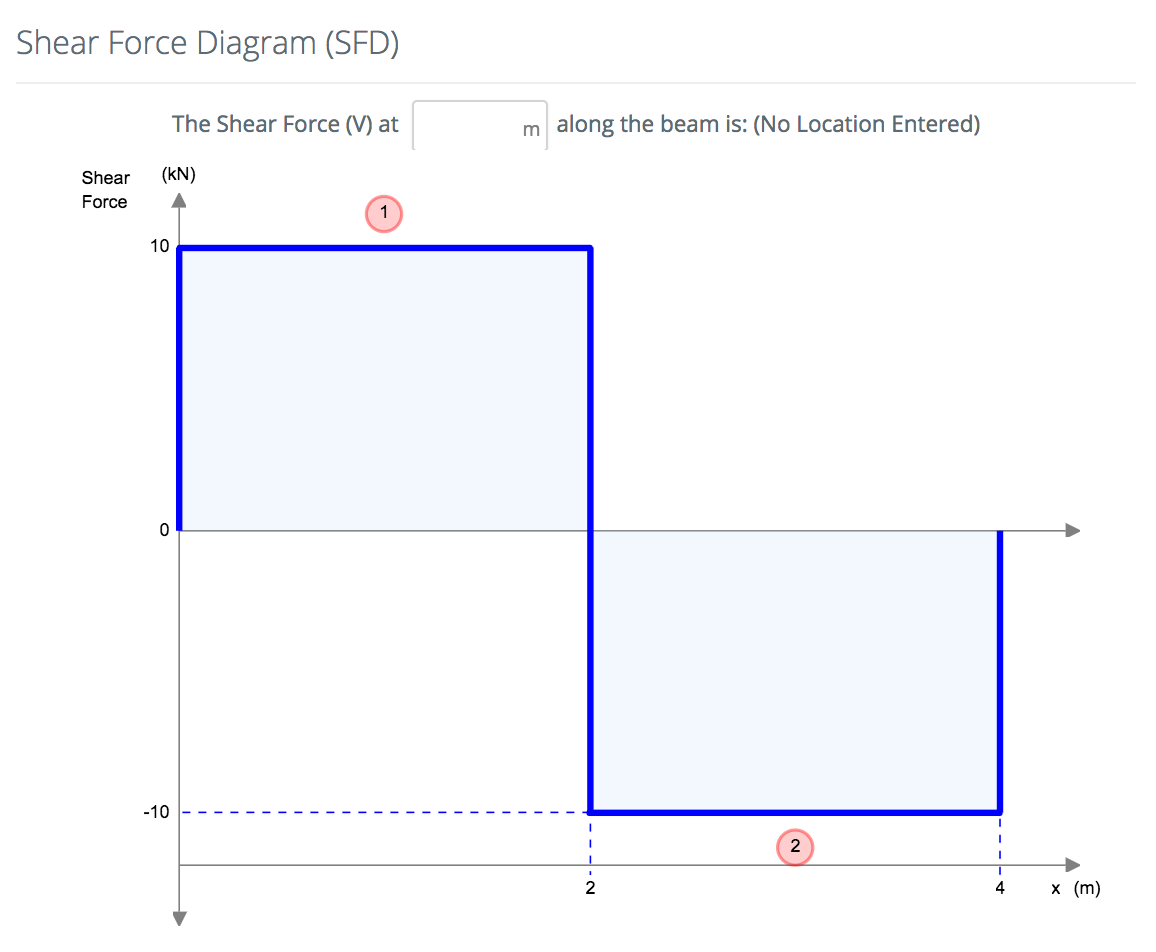 Things to keep in mind:

Visit the next step: How to calculate Bending Moment Diagrams of Simply Supported Beams.

SkyCiv Beam Analysis Software allows users to analyze beam structures easily and accurately. You can get an analysis of your beam member, including reactions, shear force, bending moment, deflection, stresses, and indeterminate beams in a matter of seconds.

If you want to give it a try first, Free Beam Bending Moment Calculator is a great way to start, or simply sign up for free today!

Was this article helpful to you?
Yes 1 No