What is ASD and LRFD?

On the one hand, LRFD stands for Load and Resistance Factor Design. In short, it consists of proportioning structural elements using some factors to reduce their resistance such that no applicable limit state is reached when the structure is subjected to some appropriate LRFD load combinations. Those load combinations are the result of factoring the actual (nominal) loads by other factors to get ultimate state loading conditions. In the design of steel and wood structures, the term “LRFD” is used to refer to this method, however, for the design of concrete and masonry structures the term “strength design” is preferred when referring to this method. 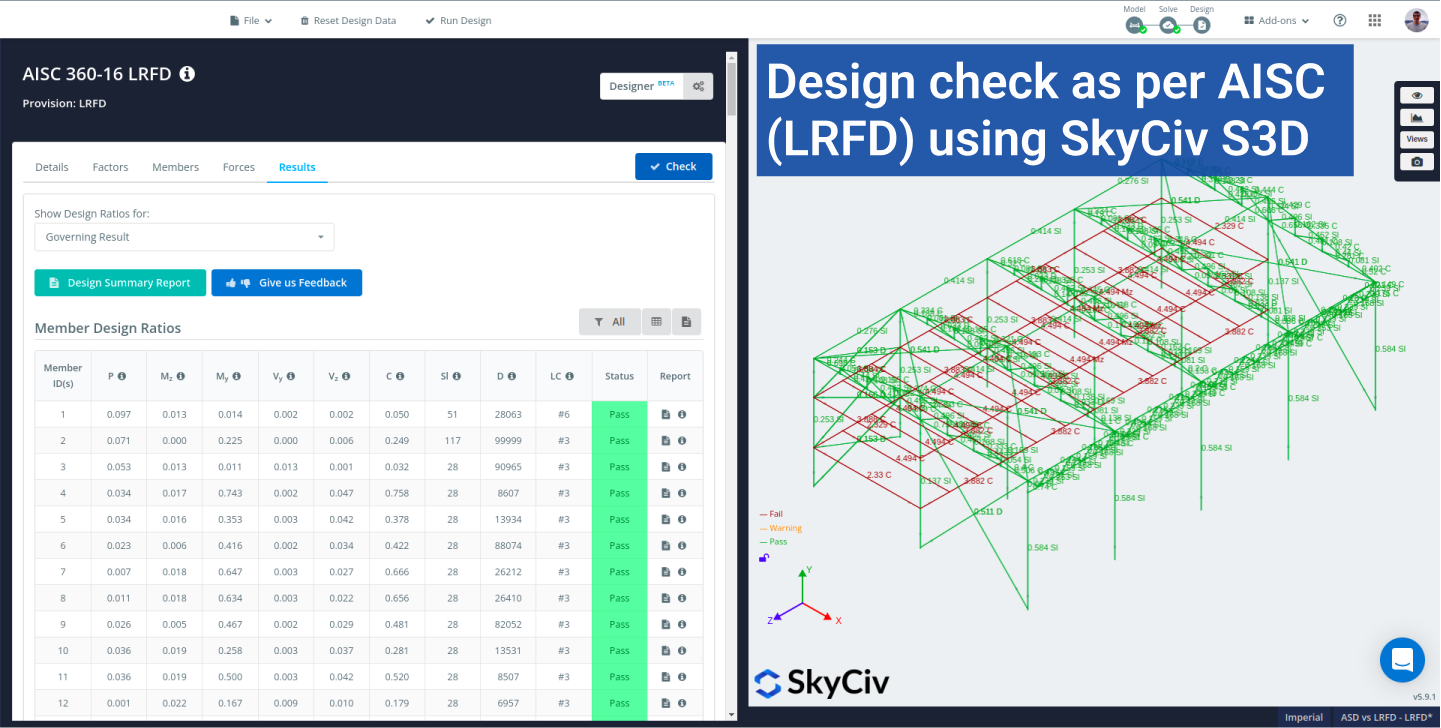 On the other hand, ASD stands for Allowable Stress Design. In summary, it consists of proportioning structural members such that elastically computed stresses at the analysis stage under nominal loads do not exceed some specified allowable stress. This method is also known as “working stress design”. Nominal loads, under which the elastic stresses are calculated, come from the ASD load combinations. 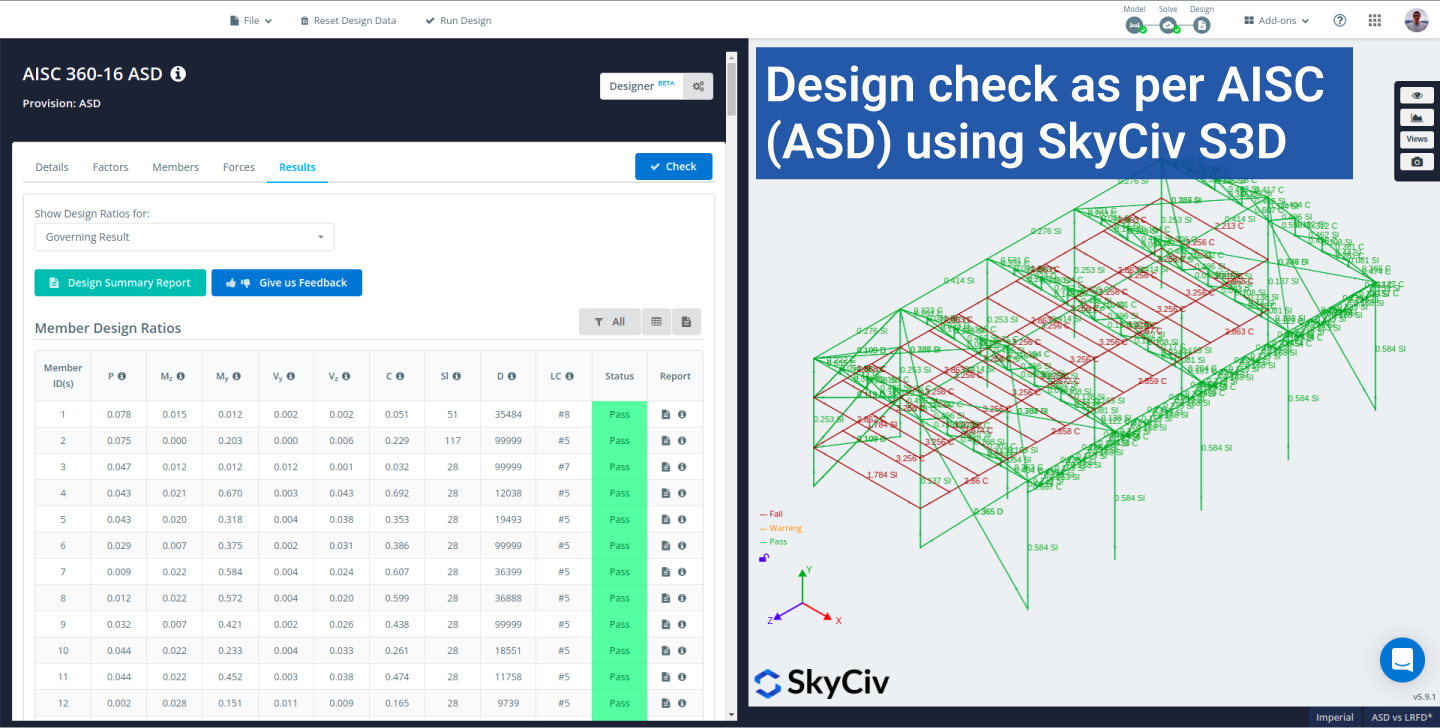 What is the difference between Serviceability and Strength?

There are two types of limit states; serviceability and strength. Serviceability limit state is reached when the structure is judged not to be useful for its intended function, this is normally associated with deflection or displacement limits. The AISC definition of Serviceability is “a state in which the function of a building, its appearance, maintainability, durability, and comfort of its occupants are preserved under normal usage.” Strength limit state is reached when the structure becomes unsafe, prior to ultimate collapse when material strength is exceeded.

In general, serviceability should be met whereas strength limits ensure safety of the structure and must be met. A good way to look at this is what is the outcome or effect of these limit states being exceeded? If the Strength Limits are reached, the structure is likely to experience some serious consequences such as buckling, instability, yielding or complete failure. If Serviceability issues are exceeded, these generally affect the people and usage of the building, for instance the occupants may feel uncomfortable if there is excessive deformations or vibrations in the building. This is not to discount the severity or seriousness of meeting serviceability checks, as these are generally contractually required, affect the building use and are extremely expensive to rectify if failure occurs.

Main differences between ASD and LRFD

When using ASD, the load combinations factors do not increase the value of the service loads being combined but represent actual service loads. Most of the combinations in ASD include dead load with a unit factor, and when combined with dynamic loads like wind, snow, and earthquake, the latter are multiplied by a number less than one, accounting for a balance between the probability of nature, economics, and safety. For more information, check the ASD load combinations article.

In contrast, load combinations in LRFD do increase the values of service loads, using factors greater than one in most of the combinations. These factors account for the uncertainty about dynamic loads, and the possibility of overpassing the expected static loads during the structure’s life cycle. For more information, check the LRFD load combinations article.

For ASD, the limit state inequality is expressed as:

Where \(R_a\), is the Required Strength based on the loads applied as per the ASD load combinations. \(R_n\) is the Nominal Strength provided by the checked member, and \(\Omega\) is the factor of safety. The fraction on the right corresponds to the allowable strength, which is the upper limit theoretically imposed on the structure material.

For LRFD, the limit state inequality looks like this:

Where \(R_a\), is the Required Strength based on the loads applied as per the LRFD load combinations. \(R_n\) is the Nominal Strength provided by the checked member, and \(\phi\) is the resistance factor that varies depending on the limit state being checked. The fraction on the right corresponds to the design strength, which is the upper limit theoretically imposed on the structure material. 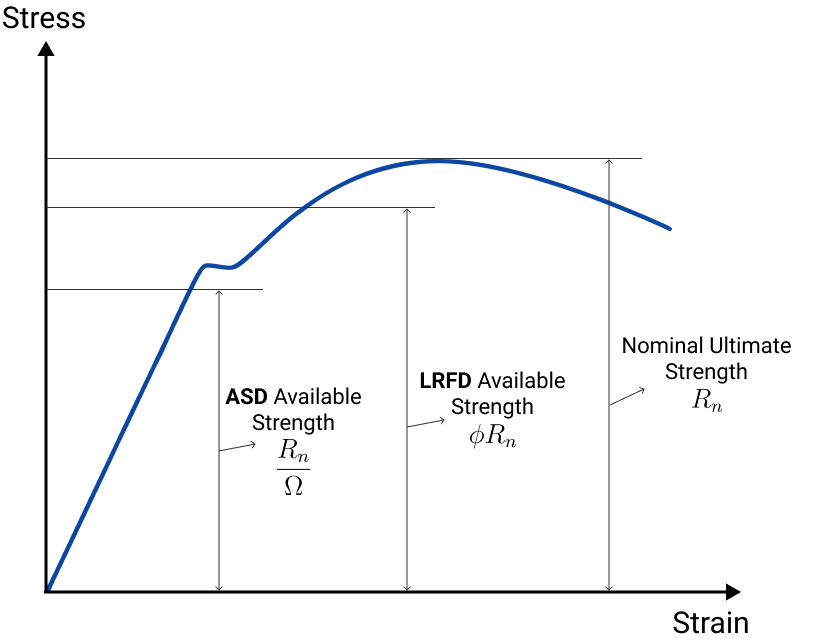 For the ASD philosophy, the factor of safety is taken as constant across the different load combinations, it only varies for the different limit state conditions: axial force, bending moment, torsion moment, and shear force.

Use SkyCiv for running design checks using LRFD or ASD

Using SkyCiv, it is possible to run design checks on a structure, using the LRFD and ASD methodologies. For both, we offer detailed calculation reports that make it easy to understand what the software is doing.

New to SkyCiv Structural 3D? Sign up today for FREE!