Beam Deflection: What is it? (Deflection Definition)

What is deflection? Deflection, in structural engineering terms, refers to the movement of a beam or node from its original position due to the forces and loads being applied to the member. It is also known as displacement and can occur from externally applied loads or from the weight of the structure itself, and the force of gravity in which this applies.

Deflection can occur in beams, trusses, frames, and basically any other structure. To define deflection, let’s take a simple cantilevered beam deflection that has a person with weight (W) standing at the end: 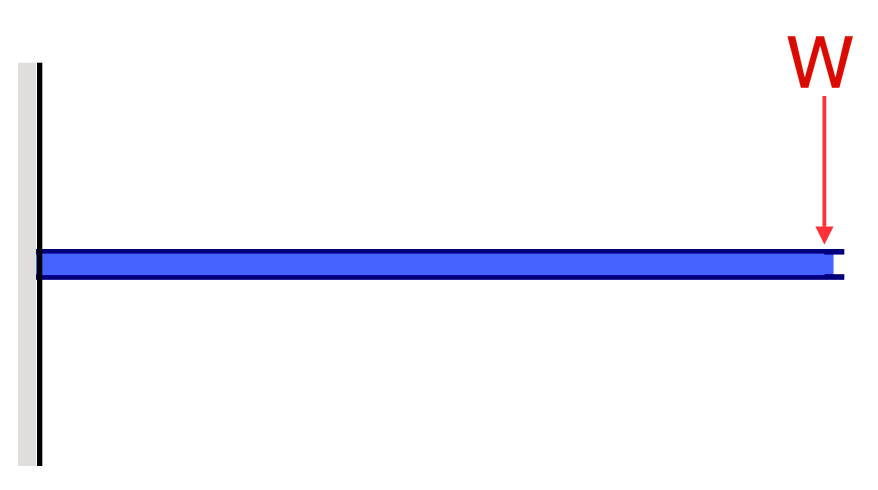 The force of this person standing at the end will cause the beam to bend and deflect from its natural position. In the below diagram the blue beam is the original position, and the dotted line simulates the cantilever beam deflection:

As you can see, the beam has bent or moved away from the original position. This distance at each point along the member is the meaning or definition of deflection.

There are generally 4 main variables that determine how much beam deflections. These include:

The deflection of a beam (beam deflection) is calculated based on a variety of factors, including materials, the moment of inertia of a section, the force applied, and the distance from support. There is a range of beam deflection formulas and equations that can be used to calculate a basic value for deflection in different types of beams.

Generally, deflection can be calculated by taking the double integral of the Bending Moment Equation, M(x) divided by EI (Young’s Modulus x Moment of Inertia).

What is the unit of deflection?

The unit of deflection, or displacement, is a length unit and normally taken as mm (for metric) and in (for imperial). This number defines the distance in which the beam has deflected from the original position.

Cantilever beams are special types of beams that are constrained by only one support, as seen in the above example. These members would naturally deflect more as they are only supported at one end.

Another example of deflection is the deflection of a simply supported beam. These beams are supported at both ends, so the deflection of a beam is generally left and follows a much different shape to that of the cantilever. Under a uniform distributed load (for instance the self-weight), the beam will deflect smoothly and toward the midpoint:

We hope you have found this short article to define beam deflection in structural engineering. Please feel free to leave a comment below, or try using our beam span calculator to try for yourself and bring this theoretical concept to practice using structural analysis software.
Was this article helpful to you?
Yes No