During the process of a concrete cantilever retaining wall design, the first step is to define the preliminary dimensions and check the stability of this preliminary geometry against overturning, sliding, and bearing. Completing these stability checks involves the calculation of all the forces acting on the retaining structure. Those loads, when factored, are the input required to perform design checks on the concrete retaining wall and ensure the dimensions and provided reinforcement, will be able to withstand ultimate state loads. Using our Retaining Wall Design Software, it is possible to perform the stability checks required during the process of a concrete retaining wall design.

In summary, design checks on the different components of a concrete retaining wall include: 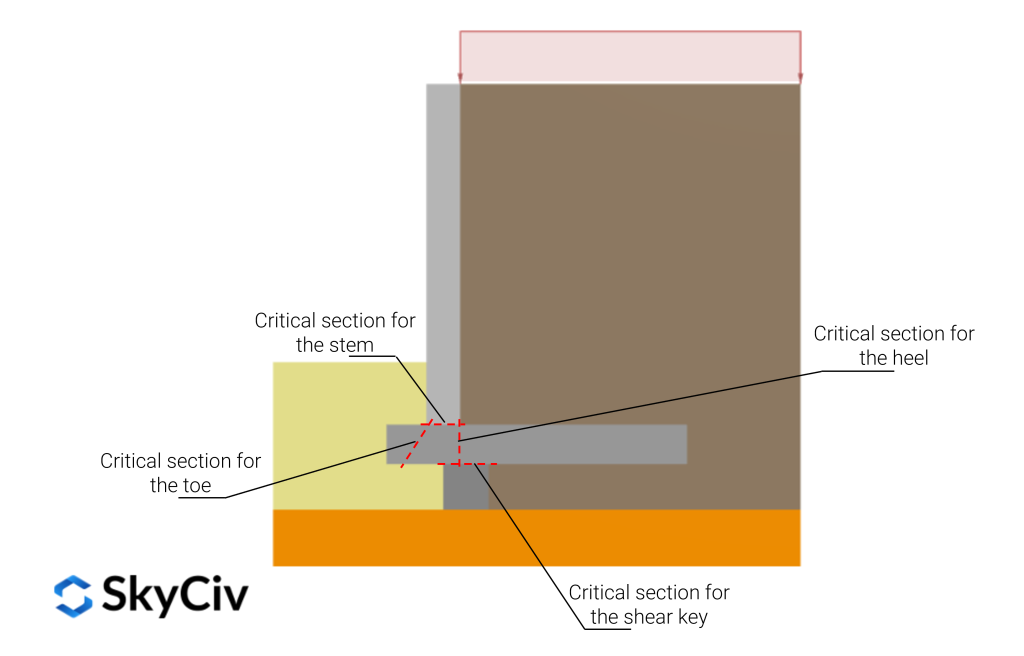 Load Factors as per ACI-318

When performing a design check on a concrete cantilever retaining wall as per the requirements of ACI-318, all the external forces that act on the structure and generate an internal force at the critical section, are factored in according to their nature, as follows:

Those factors reflect the probability of exceeding the calculated “exact” value, for the case of the structure’s self-weight, the probability of being exceeded is quite low, and therefore the factor is close to 1.0, however, external forces such as the weight and lateral pressure of the retained soil and the surcharges are more likely to take a higher value, and that’s why the load factor is closer to 2 than to 1.

Resistance reduction factors as per ACI-318

Apart from increasing the forces acting on the structure, its resistance is also reduced by applying some factors, following the LRFD (Load and Resistance Factor Design) approach. Each resistance value is reduced as follows:

Design requirements as per ACI-318

Comparing the ultimate state internal forces to the reduced member resistance to that internal force, it is possible to determine whether the provided concrete section and embedded reinforcement are strong enough or not. This can be expressed in the following two equations:

Additional requirements as per ACI-318

Apart from fulfilling the requirements mentioned above, ACI-318 presents some additional requirements for successfully completing a Concrete Retaining Wall Design:

SkyCiv offers a free Retaining Wall Calculator that will check sliding in retaining wall and perform a stability analysis on your retaining walls. The paid version also displays the full calculations, so you can see step by step, how to calculate the stability of a retaining wall against overturning, sliding and bearing! With the paid account, it is also possible to perform design checks as per ACI on the retaining wall.