In addition to the traditional modelling methods in Structural 3D, SkyCiv’s Relative Member function gives users yet another way to model their structures quicker and easier.

Sometimes, locating nodes or members in 3D space can get difficult, especially with complicated structures and members not orthogonal to the global axis’ (X, Y and Z axis). Users are able to take a single node and generate a member by projecting its other end node using a variety of different methods.

To use the Relative Member function, first select a node and either:

From here, use the dropdown to select the method of adding the relative member and the input field to put in the required data. There are two main methods (Rel, Length/Angle) to adding relative members, which will be explored below:

The “Rel.” method is the default method to adding a relative member. The three values shown in the input field (deltaX, deltaY, deltaZ) correspond to the change in position from the selected node to the newly generated node. This is particularly useful for modeling in 3D space when you know the change in X, Y, and Z between the end points. 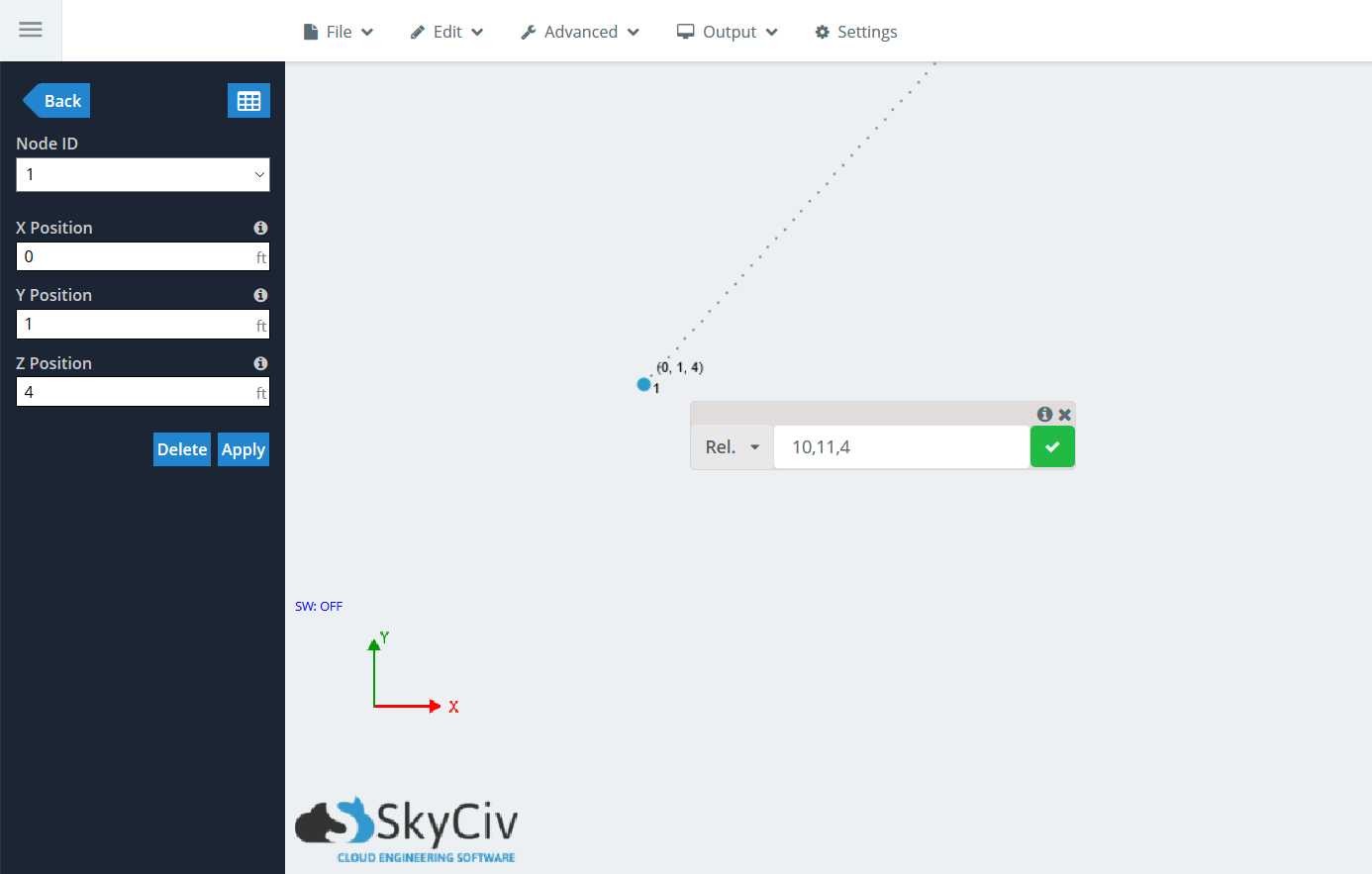 Click the green check mark, or hit Enter, to accept the generation of the member. The relative member window will stay up so you can chain multiple members in a row. If you choose to generate another member, the origin node will be Node 2, so the delta values will be relative to it, not Node 1. 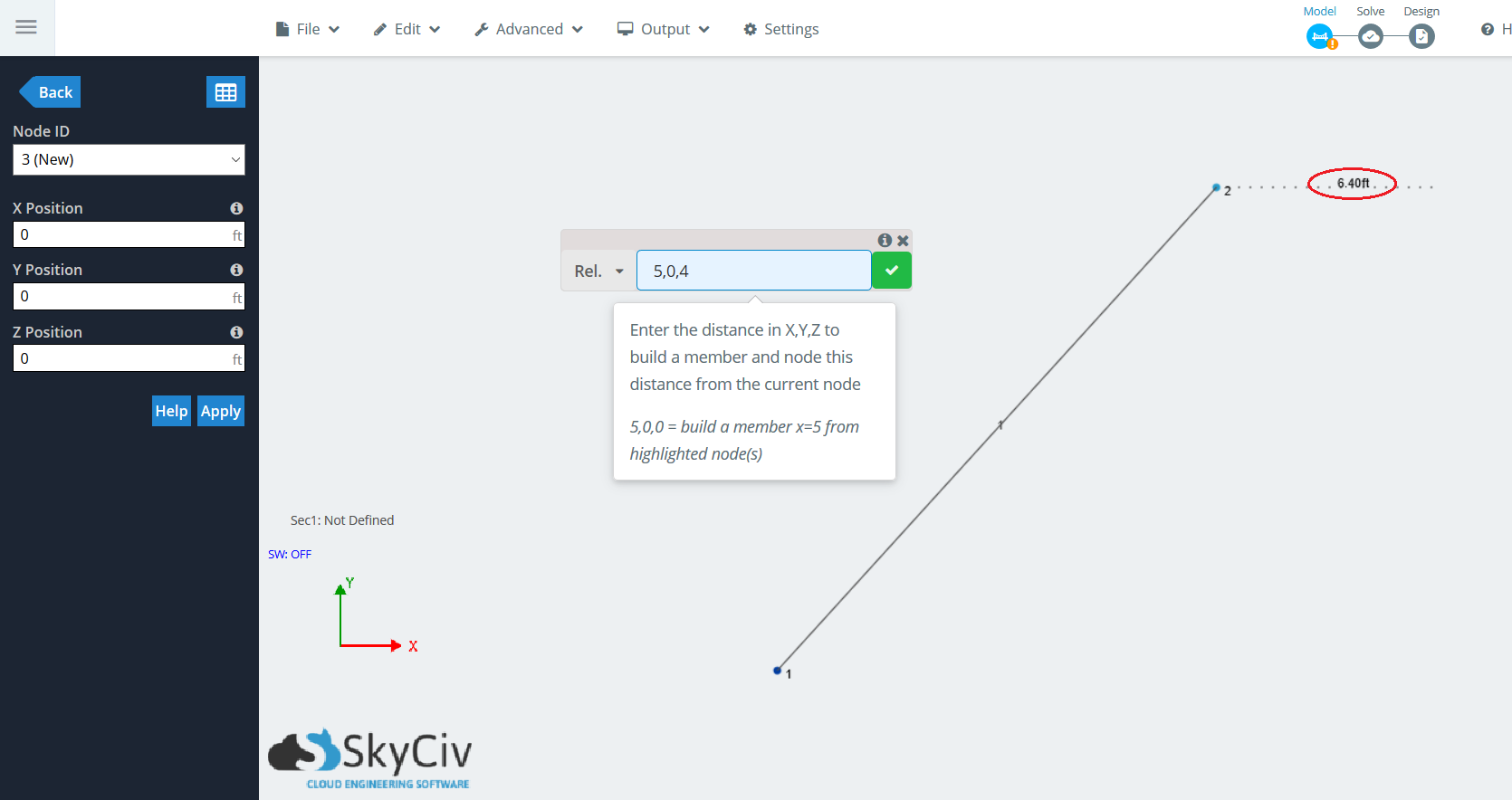 Because there are an infinite number of planes that can be used to generate a node in 3D space, users have the ability to use this method with one of the three global axis planes:  XY, YZ, and XZ. The two values shown in the input field of these three options (angle, length) correspond to the angle in degrees from the horizontal and the length of the member, respectively.

Lets say you want to generate an angled member in the XY plane originating from a node at (o,o,o), say Node 1. You know that the member sits at a 30 degree angle from the horizontal, in this case the X axis, and is 12 feet long. Select the node, press ‘R’ to bring up the Relative Member function. Click the dropdown and go to “XY”. Put in (30,12) in the input field, the projection will again show as a dotted line: 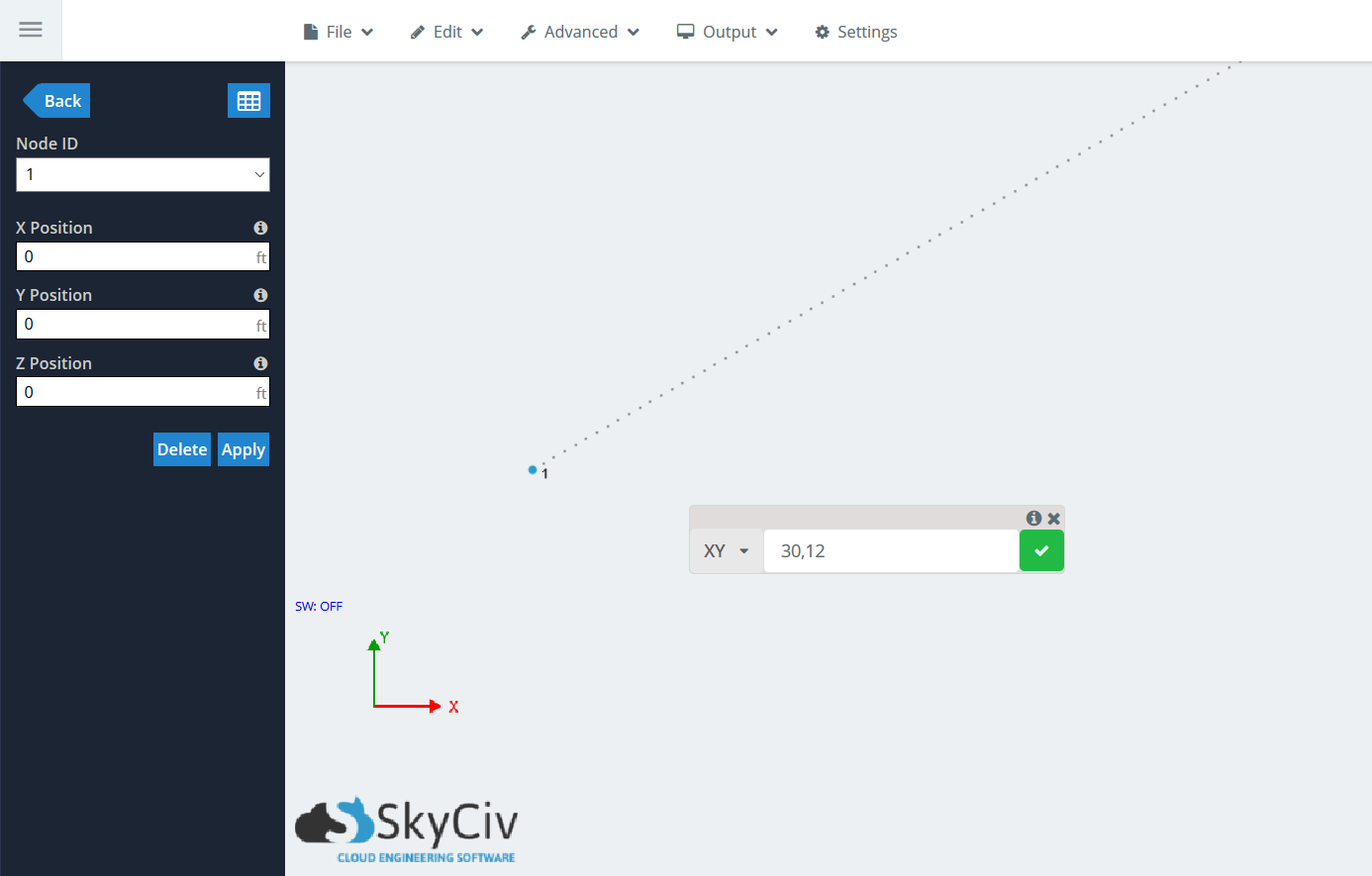 Click the green check mark, or hit Enter, to accept the generation of the member. The relative member window will stay up so you can chain multiple members in a row. If you choose to generate another member, the origin node will be Node 2, so the delta values will be relative to it, not Node 1.

The same Relative Member member function can not only be used to generate single members, but multiple at the same time. The workflow is the same, except users can select multiple nodes that they wish to generate relative members from. These nodes do not have to lie in the same plane and can be anywhere within the project.

For this example, lets look a simple elevated platform which can be very easily generated using Assembly Templates within Structural 3D. Start by clicking Ctrl and dragging from right to left to select the topmost “floor” of nodes and members.

Note: The Relative Member function only generates members from nodes, not from members. 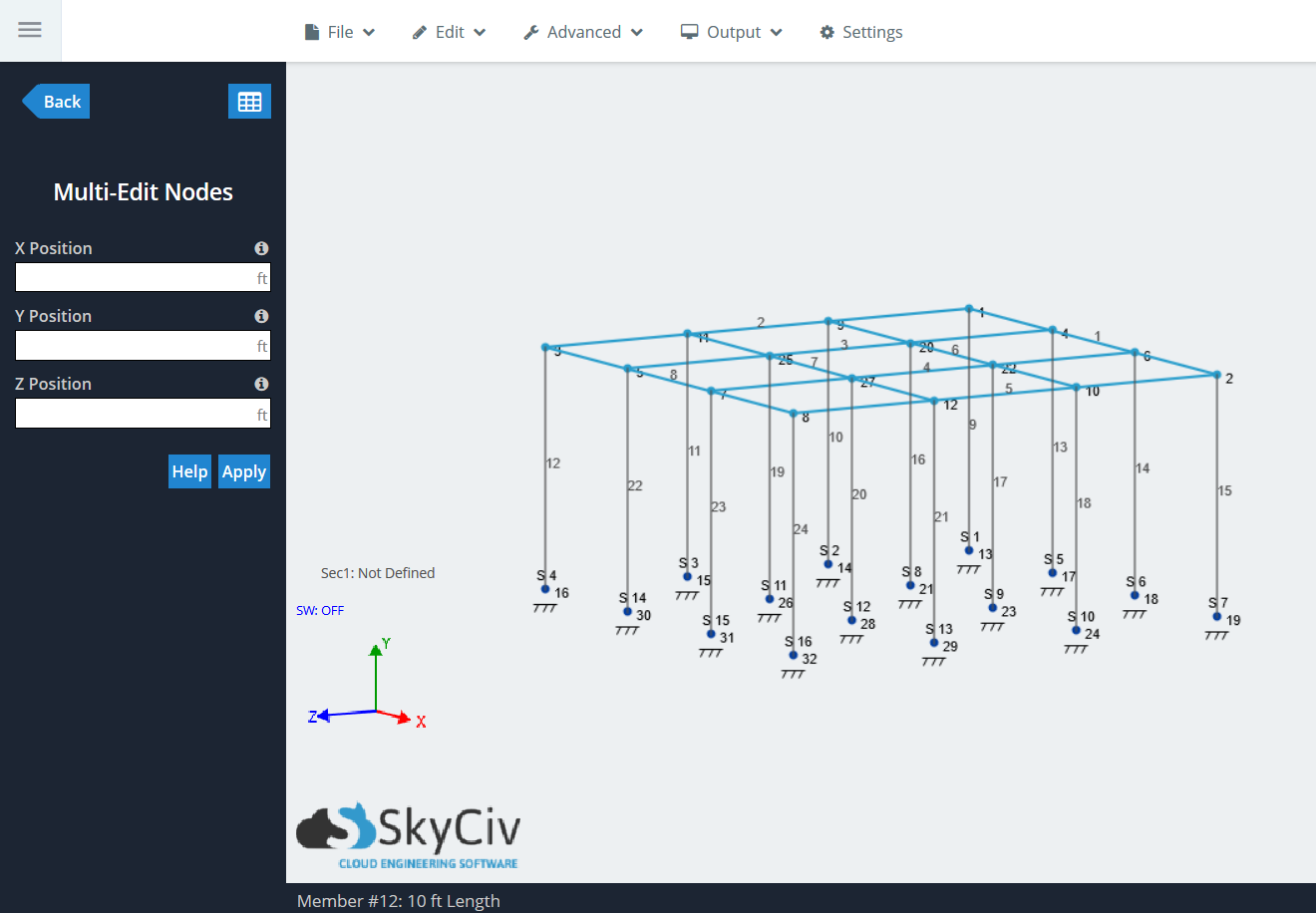 Now, create Relative Members using the “Rel.” function. Press “R” to bring up the Relative Member function and type in (10,10,2) for our delta values. You will see that there is a projection line showing the member line in addition to the member length: 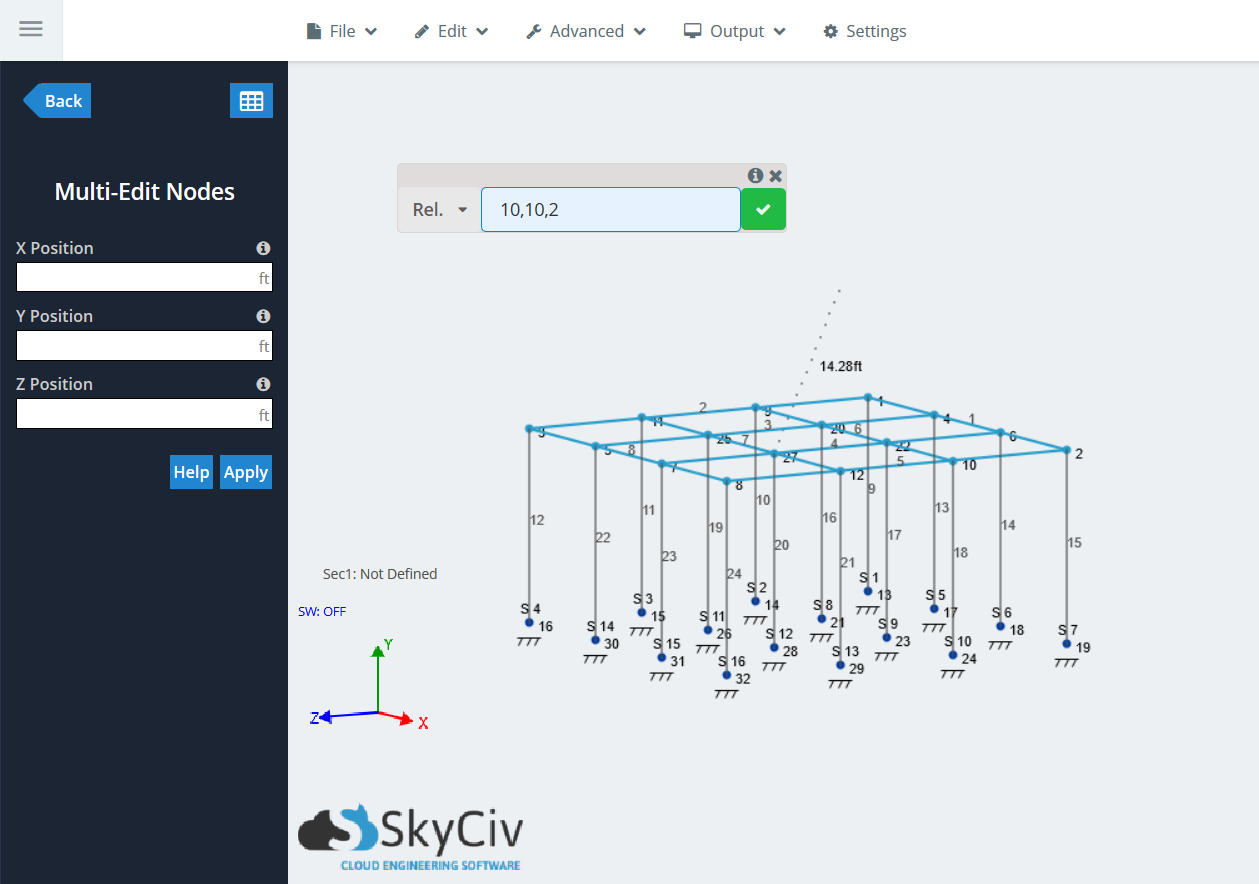 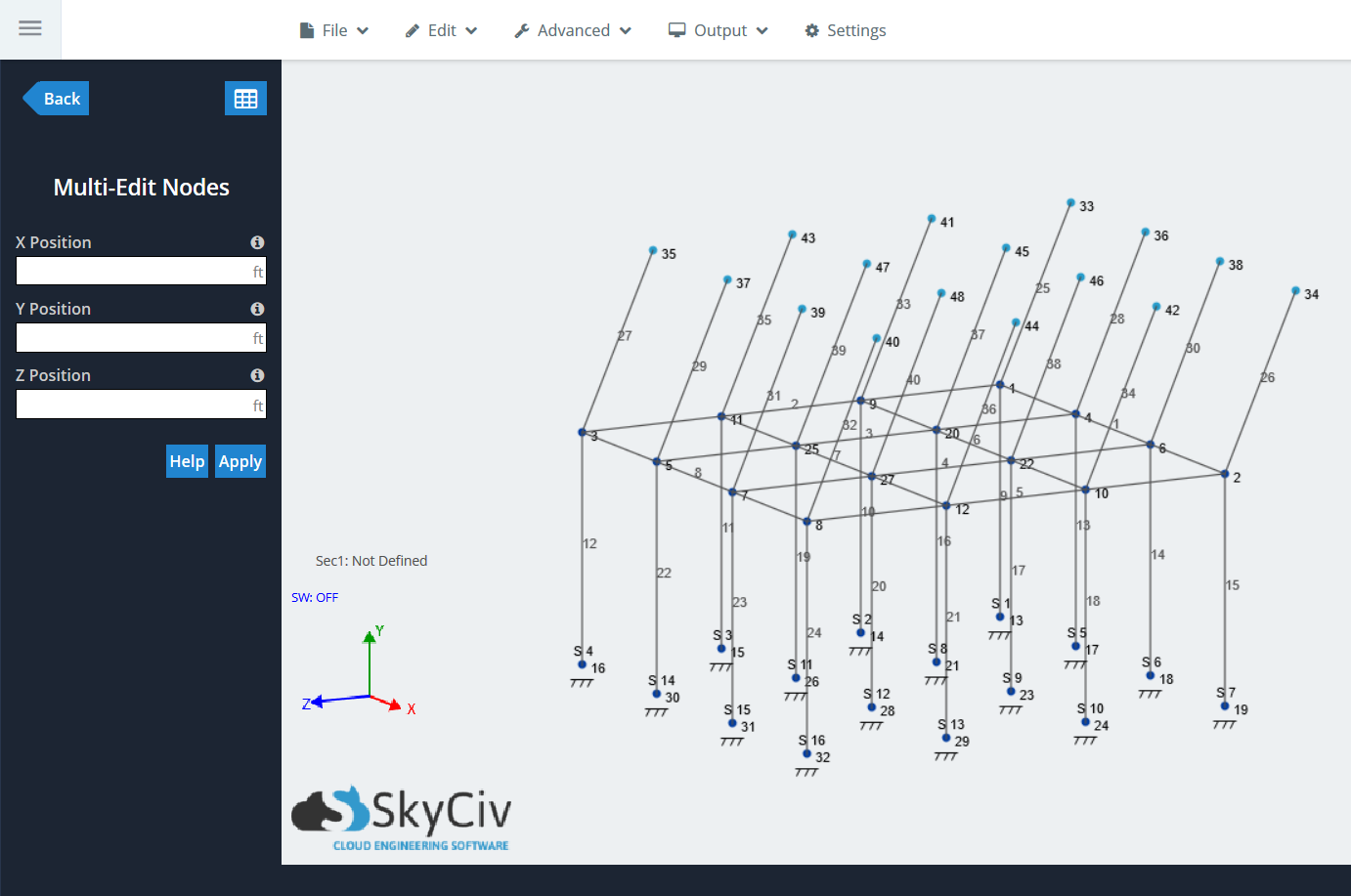 The last useful functionality located within the Relative Member function is “Shift”, which is the last item in the dropdown menu. This is a quick and easy shortcut to use the same Shift Nodes function, located in Edit > Operations > Shift Nodes. A single or multiple nodes can be shifted around in 3D space, and will stay connected to members. Similar to the “Rel.” function, users must input the projection distances for each global axis’.

Using the same elevated platform in the last example, repeat the selection of the same elements on the “top floor” of the platform. Press “R” and find “Shift” in the dropdown. Type in the same values as before: (10,10,2). When using the Shift function, the projection line will not show because a new member is not being generated: 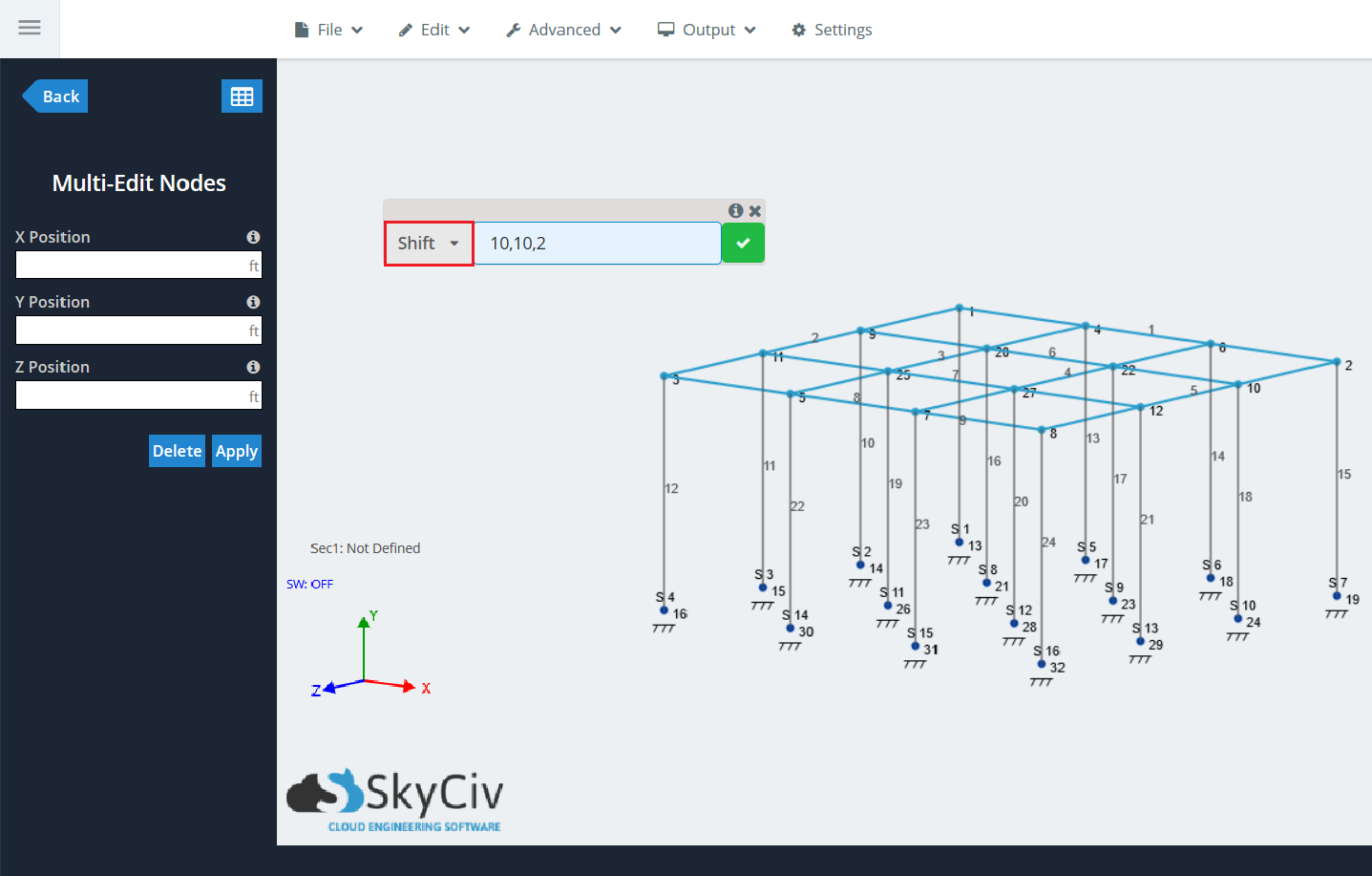 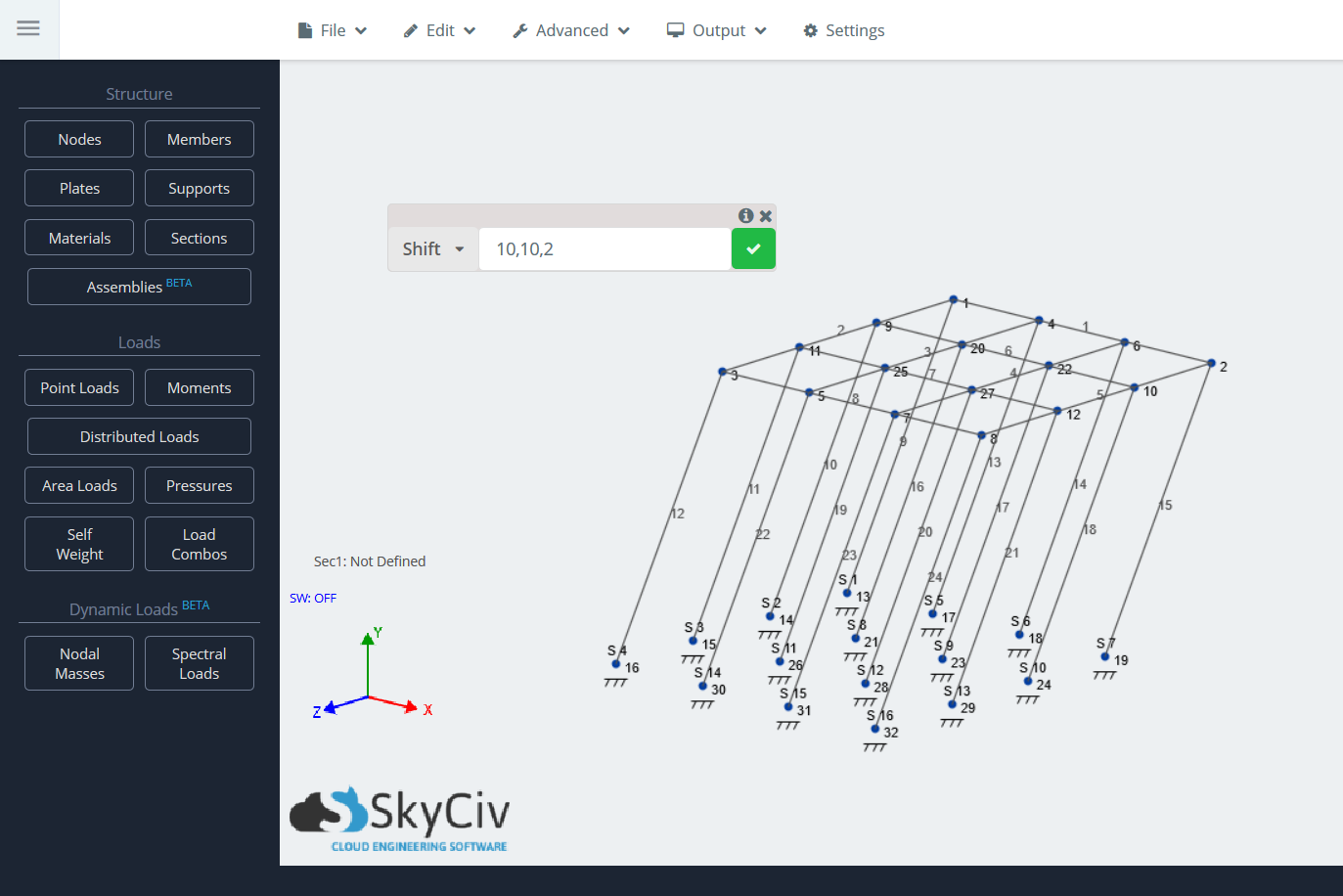 Note: This can also be done with single nodes.