Piles are long and slender members which transfer the loads from the superstructure to deeper soil or onto a rock with adequate bearing capacity. Materials used for piles may include wood, steel, and concrete. Installation of the pile into the ground may be driven, drilled, or jacked which are then connected to pile caps. A lot of factors, such as site conditions, soil type, the transmission of loads, are considered to classify the type and installation of piles. This article shall focus on designing a concrete pile in accordance with the American Concrete Institute (ACI) 318 – 2014.

SkyCiv Foundation Design module includes the design of piles conforming to the American Concrete Institute (ACI 318) and Australian Standards (AS 2159 & 3600).

Load carrying capacity of a pile

Generally, vertical loads applied on piles are carried by the end-bearing of the pile, and the skin-frictional resistance developed along its length.  The ultimate load carrying capacity (QU) shall be represented by equation (1). A factor of safety is applied to compute for the allowable load-carrying capacity (QA).

For a more detailed guide, check out our article on calculating the skin-frictional resistance and end-bearing capacity.

Structural strength of a single pile

Piles are also subjected to axial forces, shear force, and bending moment, which is why they are structurally designed similar to columns. Section 10.5.1.1 states that all factored load shall not exceed its corresponding design strengths.

Nominal shear strength shall be equivalent to combined contributions of the shear capacities of concrete and steel reinforcement.

The contribution of concrete to the shear capacity is computed as shown on equation (4) which is defined on Section 22.5.5.1 of ACI 318-14.

b = Pile width or diameter

Shear strength of steel bars (Vs)

Lateral shear reinforcement’s contribution to the shear capacity is computed as the minimum between equations (5) and (6).

Axial and flexural capacities of a single pile (øPN, øMN )

Axial and flexural capacities are checked using an interaction diagram. This diagram is a visual representation of the behaviour of the bending and axial capacities caused by an increase in load from pure bending point until a balanced point is reached. 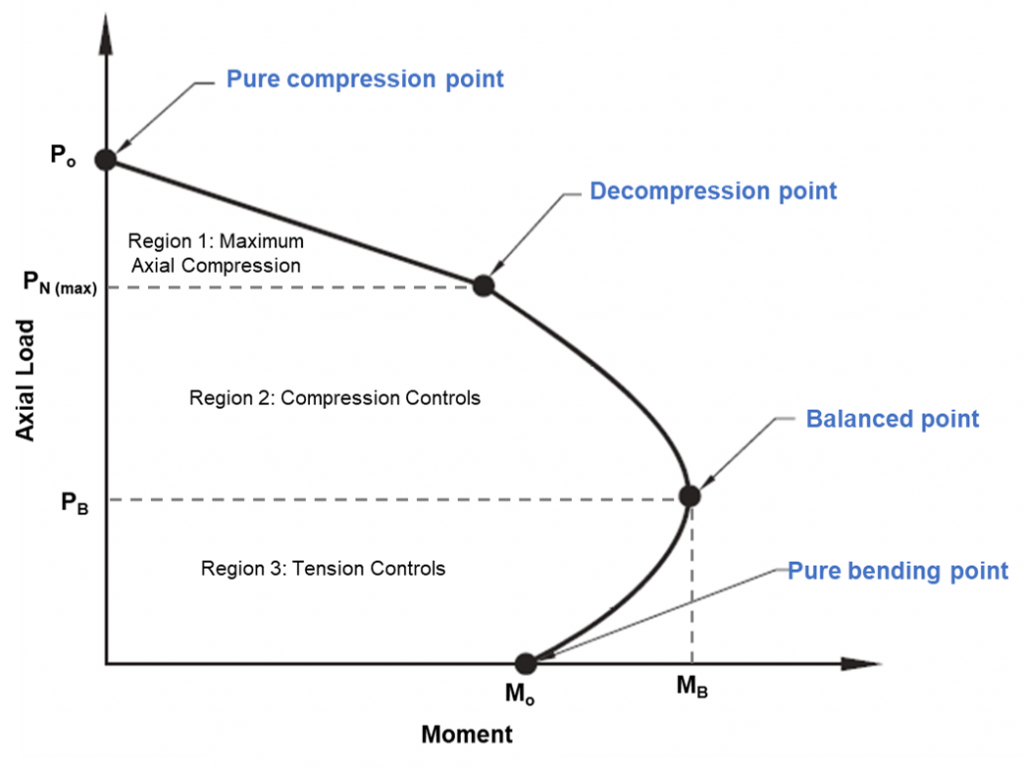 Construction of the interaction diagram for the column involves plotting a series of values of PN and MN. Values for PN shall be equivalent to the sum of the tensile and compressive forces, as shown in Figures 2a and 2b, while the corresponding MN is calculated by resolving these forces about the neutral axis. These forces include the compressive force acting on the compressive area and the forces exerted by each of the reinforcing bars which could either be compressive or tensile.   A general procedure is suggested below to construct an interaction diagram using the equations presented.

General procedure for interaction diagram of a column

(2) Determine c and the strains in the reinforcements.

A series of cases shall be considered by selecting various locations of the neutral axis, c. To set the locations of the neutral axis, different steel strains shall be selected by multiplying an arbitrary value Z to the yield strength of the steel. There is a wide range of values for Z. However, there are only four mandatory points to use for the interaction diagram.

(3) Compute for the stresses in the reinforcement layers.

Es = Modulus of elasticity of steel

(4) Determine the height of the compression stress block, a.

(5) Compute for the forces in concrete and steel.

Area of the compressive stress block:

Tensile force in steel (di≤ a):

Compressive force in steel (di > a):

(6) Calculate for the axial capacity (PN).

(7) Calculate for the flexural capacity (MN).

(8) Compute for the value of the strength reduction factor (ø).

SkyCiv Free Foundation Calculator helps you with concrete pile design and other tasks such as footing and concrete piles design. Check it out now to explore how our calculator can help you with your concrete pile project!