Definition of a Truss: What is a Truss?

A truss is an important structure type in structural engineering. So what are trusses? A truss is a triangulated system of members that are structured and connected in a way such that they only incur axial force. These members are considered two-force members as the forces are only applied at either end of the member, resulting in either a compression or tension force. They are commonly used as bridge designs, given their ability to efficiently span long distances. A typical truss might look something like this:

The joints are typically pinned connections, such that no shear or moment forces are transferred from member to member. This is a major, yet commonly misunderstood, the difference between truss and frame structures. A frame member will typically take a combination of shear, axial, and bending forces; whereas a truss member will only take axial force.

Benefits of a Truss

As we have explained the definition of a truss, let’s explore its benefits. When designed correctly, trusses are an efficient way to span long distances whilst minimizing the amount of material used. This is because the internal loads of the members are induced axially (in the direction of the member) in the form of compression or tension. This means less material can be used, and the system as a whole is more efficient, as the force is distributed among a number of members.

To maximize the efficiency of the structure (which is often measured in the material used or labor), an appropriate truss type should be selected for the design and construction. Today we will explore what types of truss bridges are out there and how they can benefit your design.

A Pratt Truss has been used over the past two centuries as an effective truss method. The vertical members are in compression, whilst the diagonal members are in tension. This simplifies and produces a more efficient design since the steel in the diagonal members (in tension) can be reduced. This has a few effects – it reduces the cost of the structure due to more efficient members, reduces the self-weight, and eases the constructability of the structure.

This type of truss is most appropriate for horizontal spans, where the force is predominantly in the vertical direction.

Pratt Trusses are most closely related to the Howe Truss, where the diagonal members are in the opposite direction (causing an inverse compression/tension behavior in the members).

It’s also important to note that in Pratt Truss Design, and most Truss design for that matter, is that the members have their end fixities set to pinned. This ensures that the force is all transferred in either compression or tension, with little (theoretically, none) transferred in the form of bending moment force.

Below is an example of a Pratt Truss, constructed and analyzed using our SkyCiv Truss Calculator. Compressive members are shown as green and tension as red.

The Warren Truss is another very popular truss structure system and is easily identified by its construction from equilateral triangles. One of the main advantages of a Warren Truss is its ability to spread the load evenly across a number of different members; this is however generally for cases when the structure is undergoing a spanned load (a distributed load). Its main advantage is also the cause of its disadvantage – the truss structure will undergo concentrated force under a point load. Under these concentrated load scenarios, the structure is not as good at distributing the load evenly across its members. Therefore the Warren truss type is more advantageous for spanned loads, but not suitable where the load is concentrated at a single point or node.

An example of a Warren Truss, and its axial forces under a distributed load is shown below. The structure was built and analyzed using SkyCiv Truss Calculator. Compressive members are shown as green and tension as red. 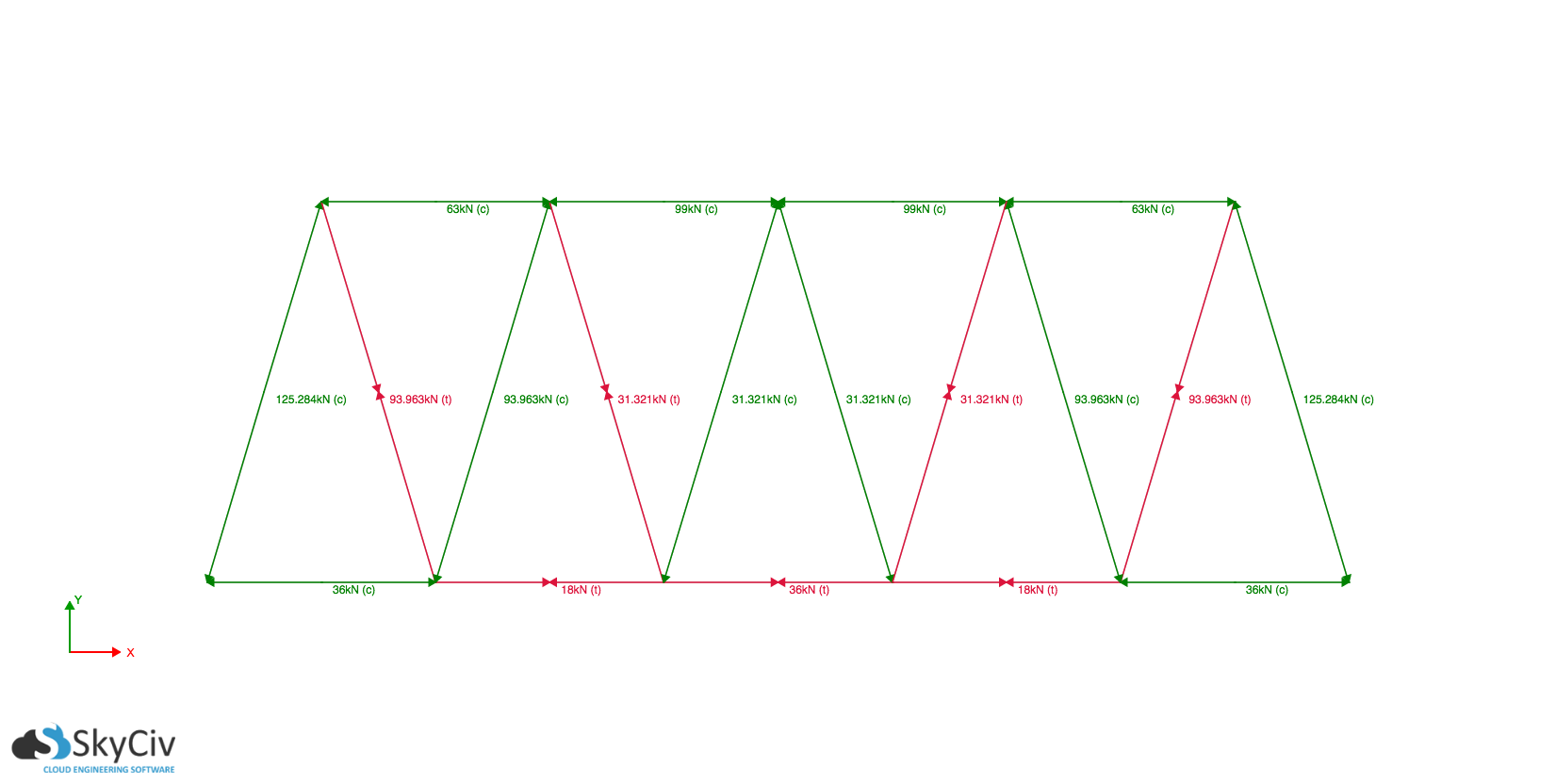 The K Truss is a slightly more complicated version of the Pratt Truss. Its main difference is that the vertical members have become shortened – improving its resistance against buckling. It does, however, have similar pros and cons to the Pratt Truss and although it is not widely used, it is a strong design. One of its main disadvantages is that the members don’t always behave as expected. A member may be in compression under one load scenario and in tension under another. This can mean the structure may not be able to be optimally designed – since

An example of a K-Truss setup and its reaction under an applied load is shown below. Compressive members are shown as green and tension as red.

Howe trusses are essentially the opposite of Pratt trusses in terms of geometry. In fact, looking at a Pratt truss upside-down will visualize a Howe truss of sorts. The entire structure is still relatively the same, but the diagonal braces are now occupying the opposite or the unoccupied joints. This switch in position of the diagonal members has a very important effect structurally. 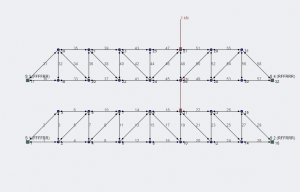 A Pratt truss (above) and a Howe Truss (below) 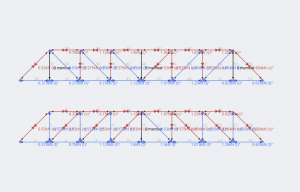 As they are similar in structure to Pratt trusses, their uses are generally the same. To maximize the efficiency of the truss, the truss can be loaded at the joints of the bottom chord. Roof trusses can be loaded with a ceiling load for example.

Another thing to note is that, depending on the geometry and loading, Pratt trusses can have more unloaded members than Howe trusses.

The Fink truss in its most basic form has web members that follow a V-pattern which can be repeated several times. As the top chords are sloping downward from the center, the V pattern becomes noticeably smaller. As Fink trusses rely more on diagonal members, they can be very efficient at transmitting loads to the support. 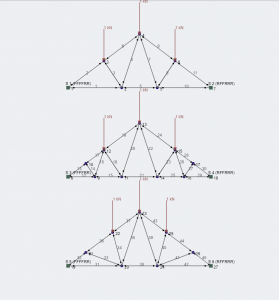 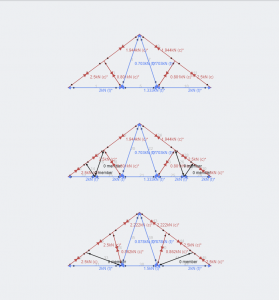 On the exterior, a gambrel truss has two different slopes, where the slope gets steeper from the center. Due to its outward-protruding shape, gambrel trusses can effectively be fitted with a hollow center, which can be used as a storage area. As such, the upper section of a barn is usually shaped in a gambrel. In the case of a barn, as the members are usually constructed with wood, the structure acts more like a frame than a truss. Derivatives of the gambrel include the Mansard roof, which is also called a French roof, hence its popularity in France. 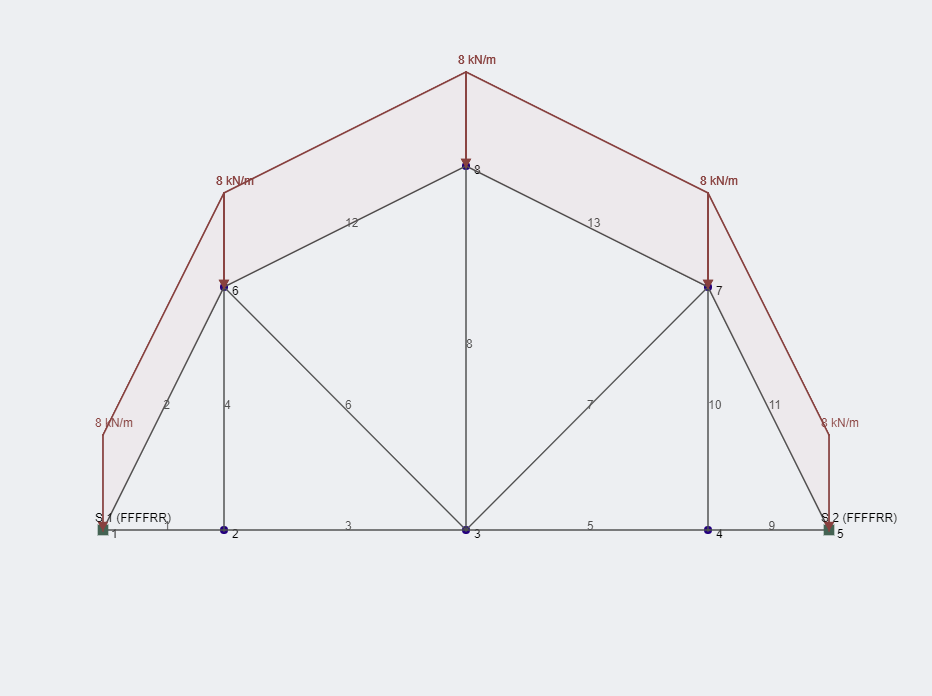 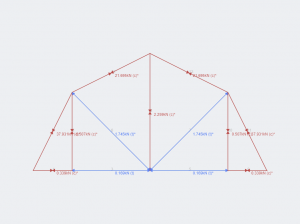 We hope you have found this tutorial useful. Visit our SkyCiv Free Truss Calculator to use for yourself, and experiment with how trusses work.

To explore more of SkyCiv software and make the most of our product for your structural projects, sign up today to get started!