What is Response Spectrum Analysis?

The Response Spectrum analysis method of earthquake analysis is mainly used in structural design practice and has been established in different design codes such as Eurocode, AASHTO, and ASCE. The basic concept of the method derives from the formula, in which the inertia forces are determined as the sum of mass multiplication on acceleration value and adjusting factors.

After the Response Spectrum Analysis is performed, seismic loads will be generated. Below is the description of the formula for calculation of seismic load at element node \({S}_{i}\)

\(\beta=\) dynamic factor that depends on the period of a structure frequency,

\(\eta=\) factor that depends on the relevant eigenmode of the structure.

To perform Response Spectrum analysis, users must be operating in SkyCiv Structural 3D (S3D). To begin, users need to apply dynamic loads to their structure. This can be done by going to the left side menu and locating the two buttons, Nodal Masses and Spectral Loads:

When applying nodal masses, there are two methods that can be used. For the first method, translation and rotational mass values can be directly applied by the user for any node. To do this, click on Nodal Masses as shown above. Here is a look at the input window that users can expect to see:

Similar to other inputs throughout Structural 3D, all of these values can be added or adjusted in the Nodal Masses Datasheet, which can be opened by clicking on the datasheet icon shown in the previous figure, or going to Edit > Datasheet Entry > Nodal Masses. Users can expect a similar window to this:

The second method of applying Nodal Masses to a structure in Structural 3D is to convert existing static loads into Nodal Masses. To do this, click on Nodal Masses as shown previously, and then on the Convert Loads to Masses button at the top. This method gives users the power to select a Load Group already applied to their model, input a conversion factor (converted load is multiplied by this factor) and select the action direction of the resultant Nodal Masses. See below for the input window as described: 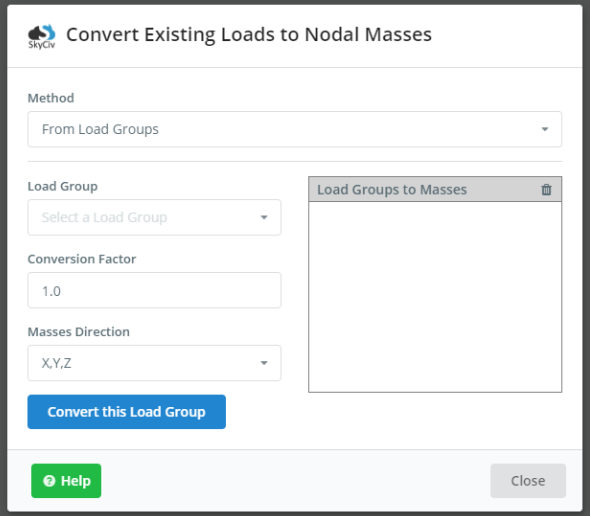 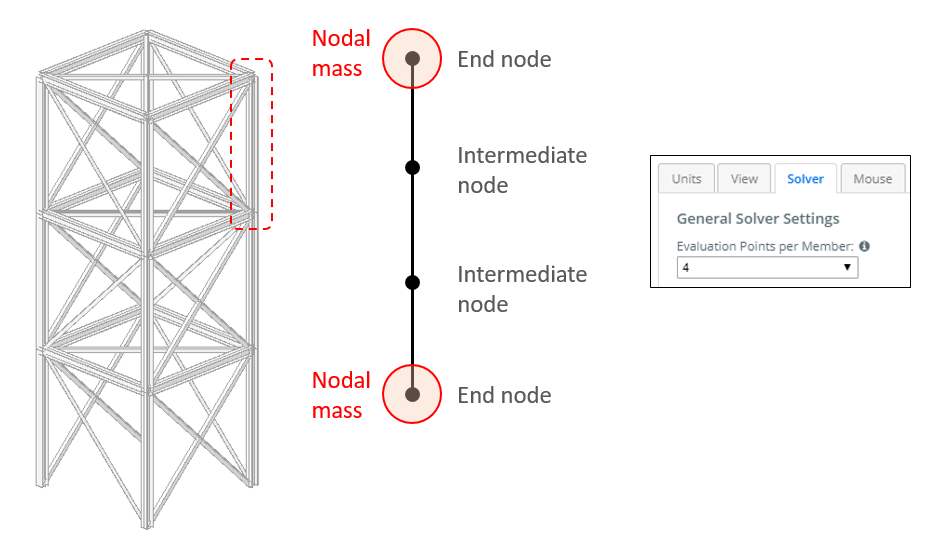 At the stage of its release, Nodal Masses can only be applied to members (e.g. beams or columns).

With User Input, users will need to define the Spectrum Data v. Period curve manually and input the corresponding “X” and “Y” values accordingly. Spectrum Data is the normalized acceleration obtained by dividing the acceleration spectrum by the acceleration of gravity. Similar to other data spreadsheets throughout SkyCiv Structural 3D, data can be copied/pasted from MS Excel into the corresponding table (Ctrl + V). Here is an example of the User Input version of the Response Spectrum Function: 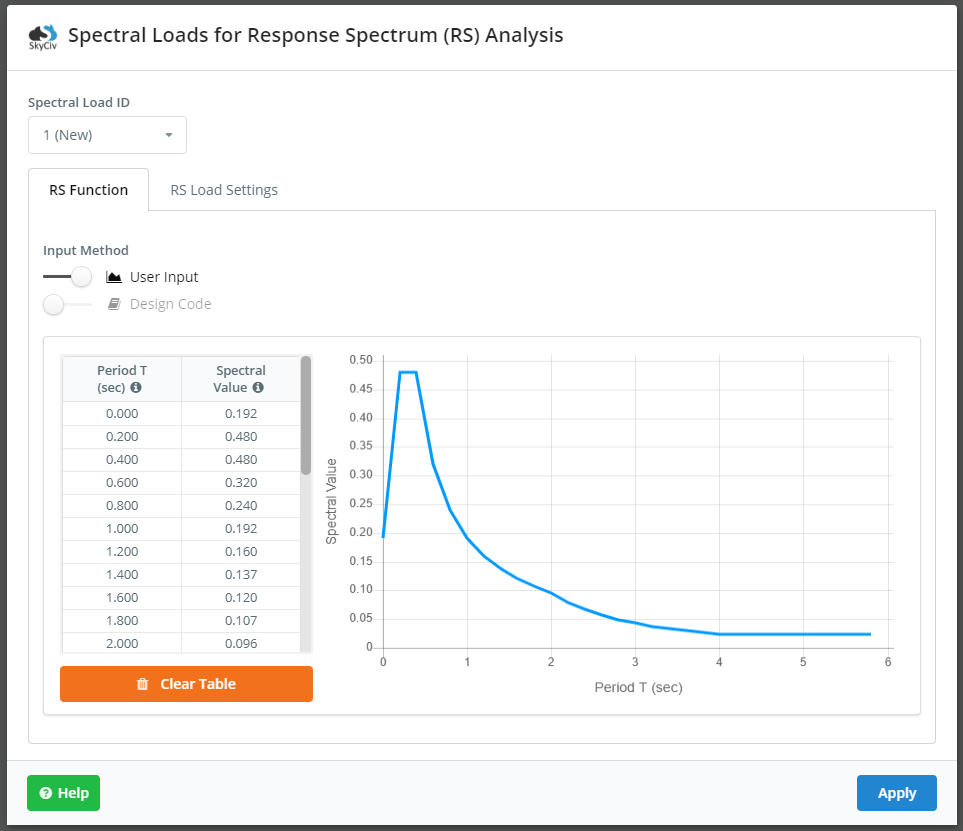 The Design Code method is more common and is commenced by switching the option over to Design Code. This is much simpler as users can easily select their relevant design code and subsequent seismic properties and parameters. After inputting the correct values in their respective fields, the Response Spectrum Function can be automatically generated by clicking the Plot Function button. See below for the relevant inputs for Eurocode 8: 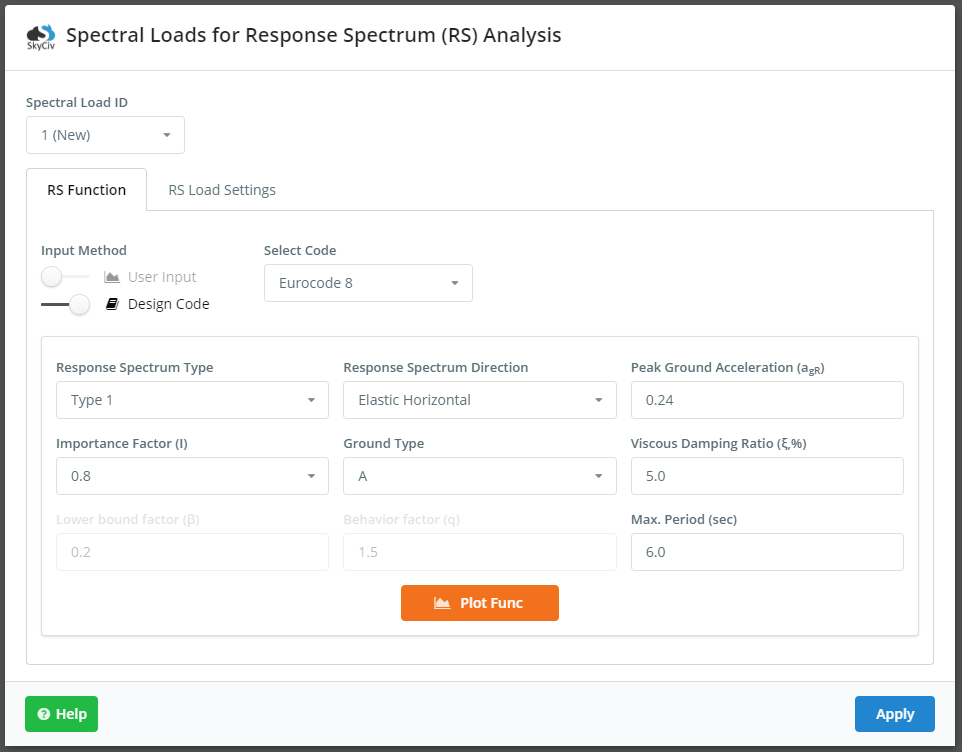 Note, damping ratio is used in the combination method CQC. Here is a look at the RS Load Settings tab and its inputs; these inputs are the same for every design code: 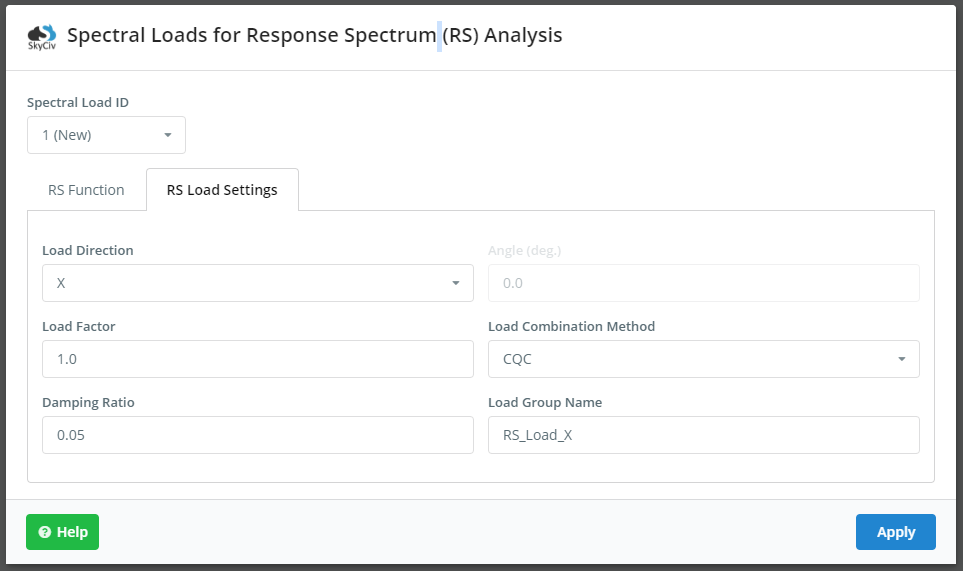 Note, the direction the resultant seismic load can be non-orthogonal to the cardinal directions in the model. To do this, users can select the load direction of XZ. The Angle field will become enabled and users can input the angle they wish. The angle is defined as the angle from the global positive X-axis, as shown: 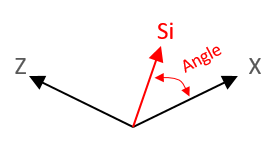 Running the Spectrum Response Analysis and Viewing the Results

It is good practice to define the frequency settings (Top Menu > Settings > Solver) before launching the Response Spectrum Analysis. The section titled Eigenvalue Solver Settings is where users can change these settings, notably the number of Dynamic Modes, as shown: 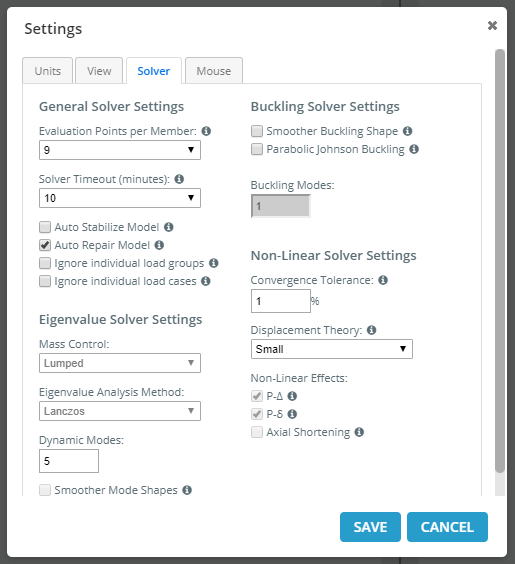 Once the analysis is performed successfully, users can view the analytical results similar to any other load group by selecting the load group from the drop down. The name of the load group will correspond to the name given in Spectral Loads > RS Load Settings. Users can check the maximum stress deformed state of the structure due to seismic action (displacements, reactions, element forces/stresses). 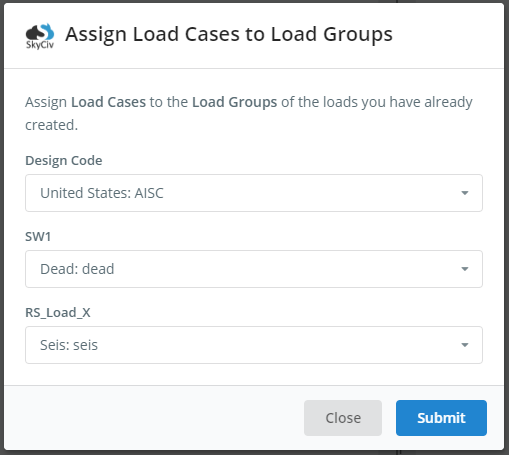