A step-by-step guide on determining the support reactions in beams:

Determining reactions at supports is always the first step in analyzing a beam structure, and it is generally the easiest. It involves calculating the reaction forces at the supports (supports A and B in the below example) due to the forces acting on the beam. You will need to know this to progress through and calculate bending moment diagrams (BMDs) and shear force diagrams (SFDs); an important part of your statics and structural college/university courses. SkyCiv offers a powerful Free Reaction Calculator that allows you to model any beam and show these hand calculations for you, but it is also an important concept to understand.

Watch Tutorial: Determine the reactions at the supports

When solving a problem like this we want to first remember that the beam is static; meaning it is not moving. From simple physics, this means that the sum of the forces in the y-direction equals zero (i.e. the total downward forces equal the total upward forces). A second formula to remember is that the sum of the moments about any given point is equal to zero. This is because the beam is static and therefore not rotating.

To determine the reactions at supports, follow these simple steps:

1. Let the sum of moments about a reaction point equal to ZERO (ΣM = 0)

Consider a simple example of a 4m beam with a pin support at A and roller support at B. The free-body diagram is shown below where Ay and By are the vertical reactions at the supports:

So there we have it, we have used the two above equations (sum of moments equals zero and sum of vertical forces equals zero) and calculated that the reaction at support A is 10 kN and the reaction at support B 10kN. This makes sense as the point load is right in the middle of the beam, meaning both supports should have the same vertical forces (i.e. it is symmetric).

In summary, here are the full hand calculations produced by SkyCiv Beam: 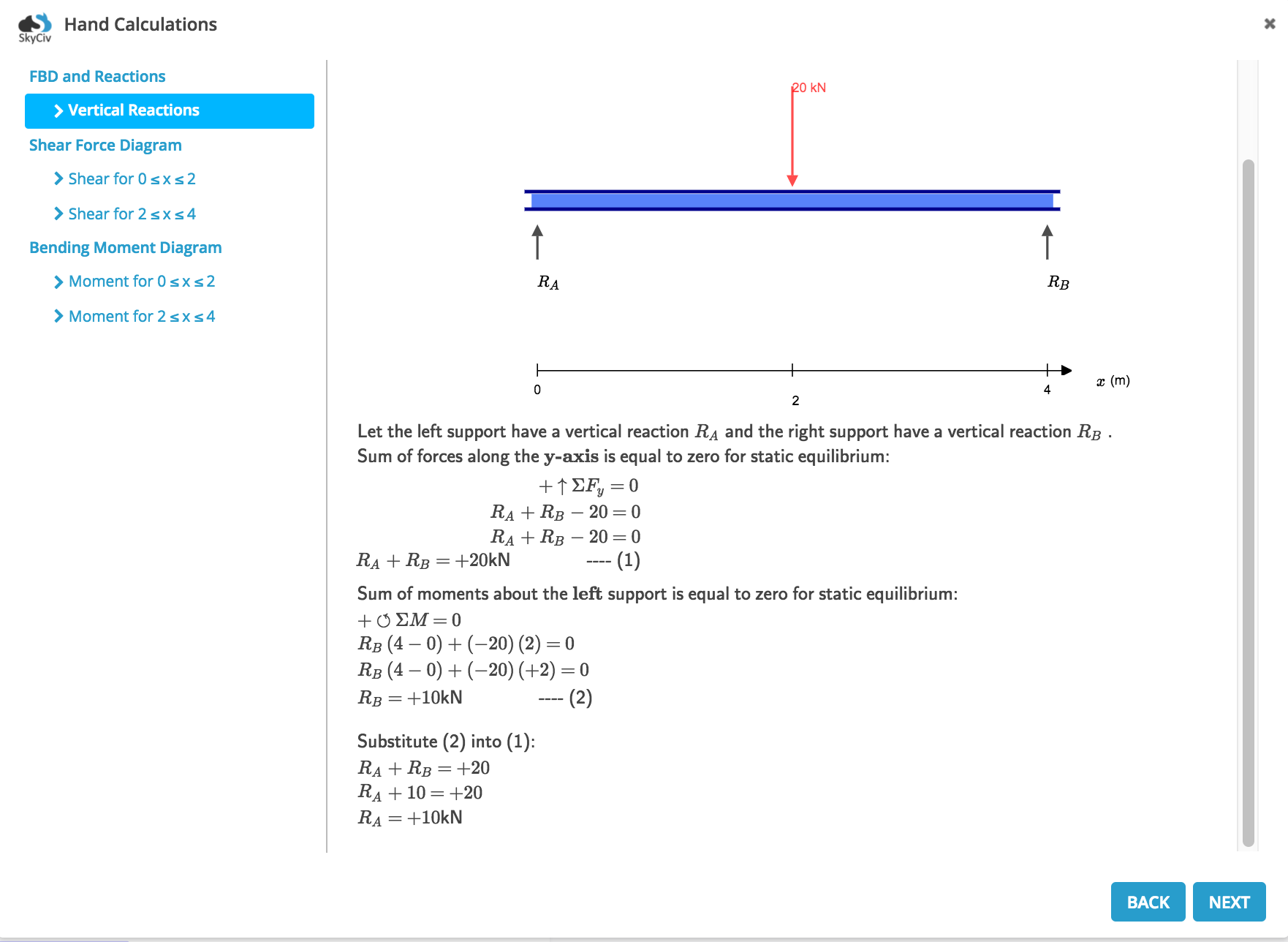 Through this article, you have learned the concept of reaction forces at the supports. SkyCiv Beam Analysis Software allows users to analyze beam structures easily and accurately. You can get an analysis of your beam member, including reactions, shear force, bending moment, deflection, stresses, and indeterminate beams in a matter of seconds.

If you want to give it a try first, Free Beam Calculator is a great way to start, or simply sign up for free today!