Supports need to be added in order to restrain the structure. If no supports were present then the structure would not be static and be unsolvable. It is important to remember that a structure must be restrained in every direction at some point by any of the supports. i.e. every degree of freedom must be accounted for by at least one ‘F’ in the structure.

There are 3 types of letters (or of releases) you can use: 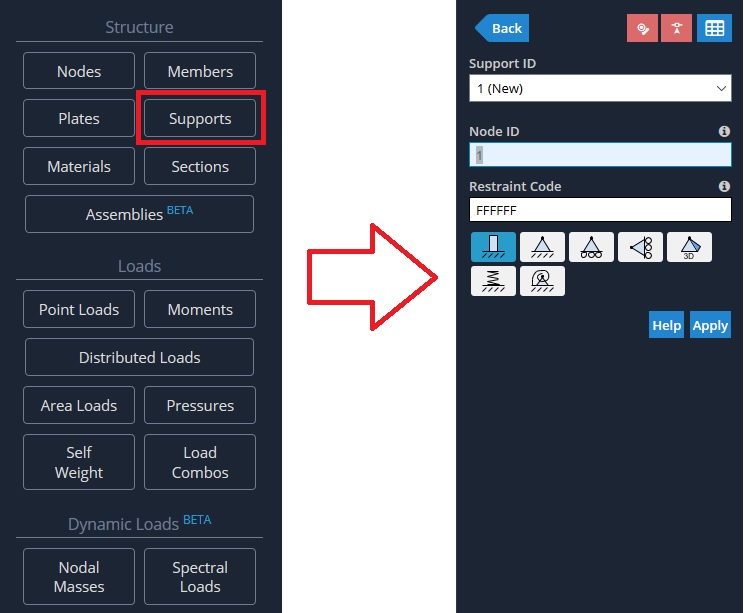 Supports can be selected from the pre-configured support buttons. Along with their fixity codes, these include:

Any support outside of these pre-configured ones can be manually typed into the “Restraint Code” field.

For each degree of freedom in translation and rotation, it is possible to define a direction as follows:

For example: ‘BNBBBB’ = Restrains movement in both axis directions, except the global Y-axis which is only supported in the negative direction.

Settlements are movements of the supports of a structure. It can occur if the supports/foundations are not fully compacted, and soil settles around it. To model settlements, click into the “Supports” menu, and then click the “Settlements” button on the top right. Settlements can only be applied to nodes that have a support specified at that node. The amount of translation or rotation of the settlement can be specified in the form. 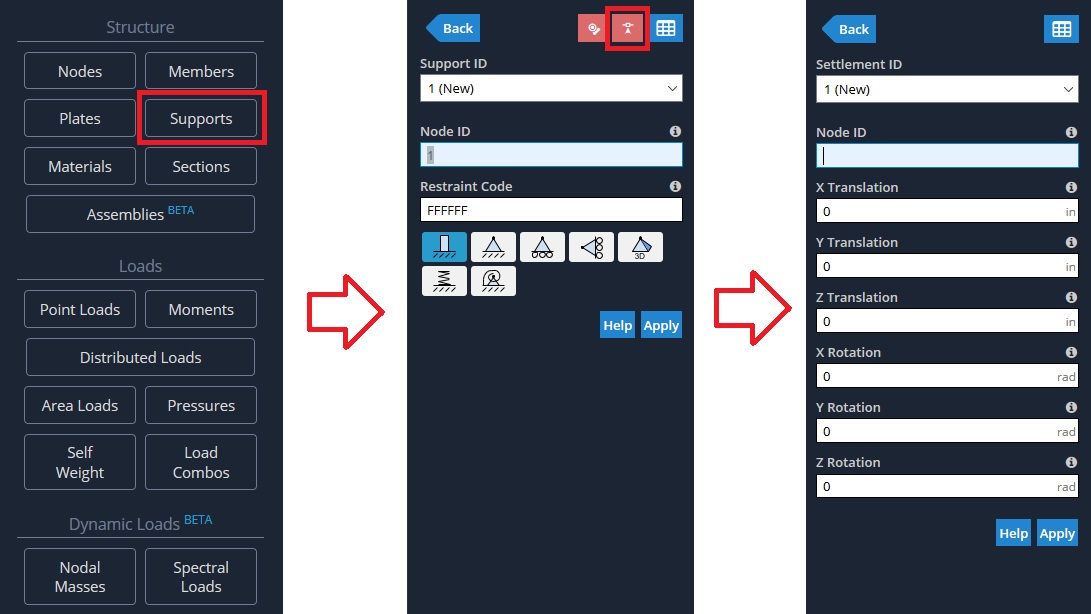 Settlements can be used as a way to define a deflection load or fixed deflection at that location. For instance, you could apply a support and settlement displacement at a midspan of a member and the analysis will apply that displacement at that node location. In the below example, a positive settlement of 5 inches has been added to camber the beam upwards: 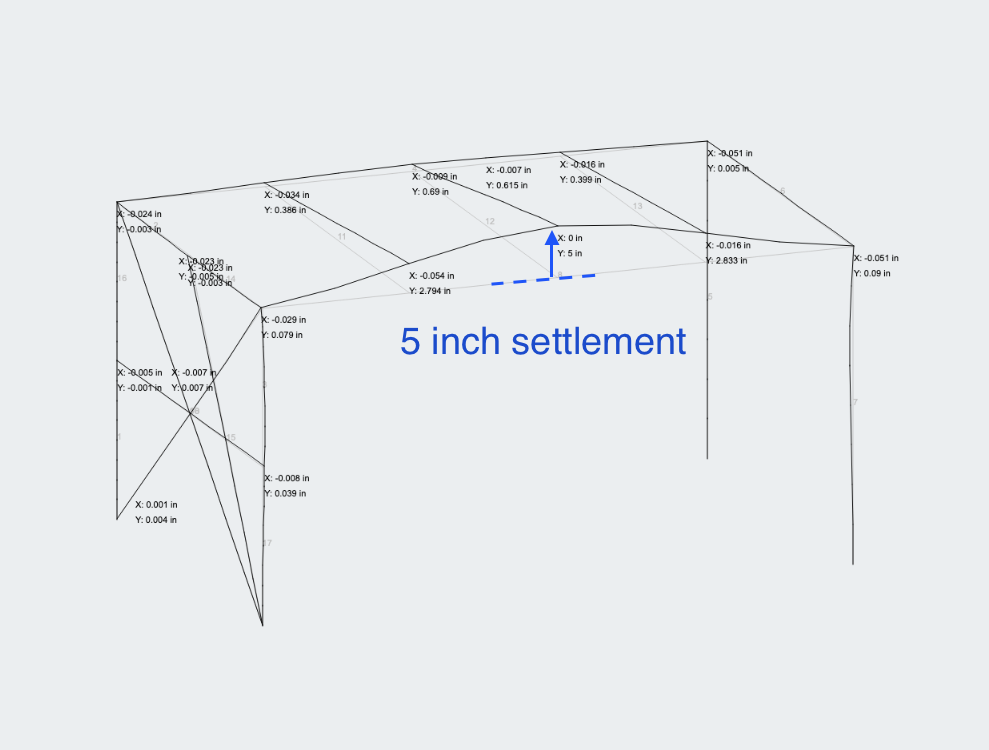 SkyCiv offers the capability of adding spring supports in any direction/rotation. Users can partially restrain a degree of freedom with spring supports. These fixities work the same as supports and member-end fixities, but instead of adding an ‘R’ the user would define the degree of freedom as a ‘S’. So for instance, if you wish to add a vertical spring support, the user would add the fixity code “FSFRRR” – the second character would denote the Translation Y degree of freedom, so inputting that as an “S” means it is partially released in the Y direction. Note, the RRR is entered as common practice as typically the rotations are also released. 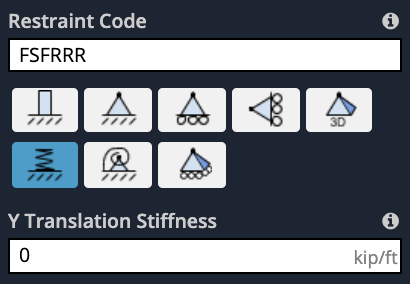 Once the user enters an ‘S” in a particular direction, another input will appear to prompt the user to enter a Stiffness for that particular direction. e.g. if the user enters a Vertical Spring (like the above example) an input for Y Stiffness will appear. The stiffness input is entered as force/distance (kip/ft, kN/m, etc..) which essentially represents how much force is required to compress the spring by a given distance (foot, meter).

The spring stiffness (normally denoted as k) can be calculated in a few different ways (based on Hooke’s Law (F/displacement), or based on the material EA/L) or can be supplied by the manufacturer of the spring support.

To model an inclined support, go to the “Supports” menu, then click on the inclined support button. The Inclined Roller Support popup will appear, input the necessary data. 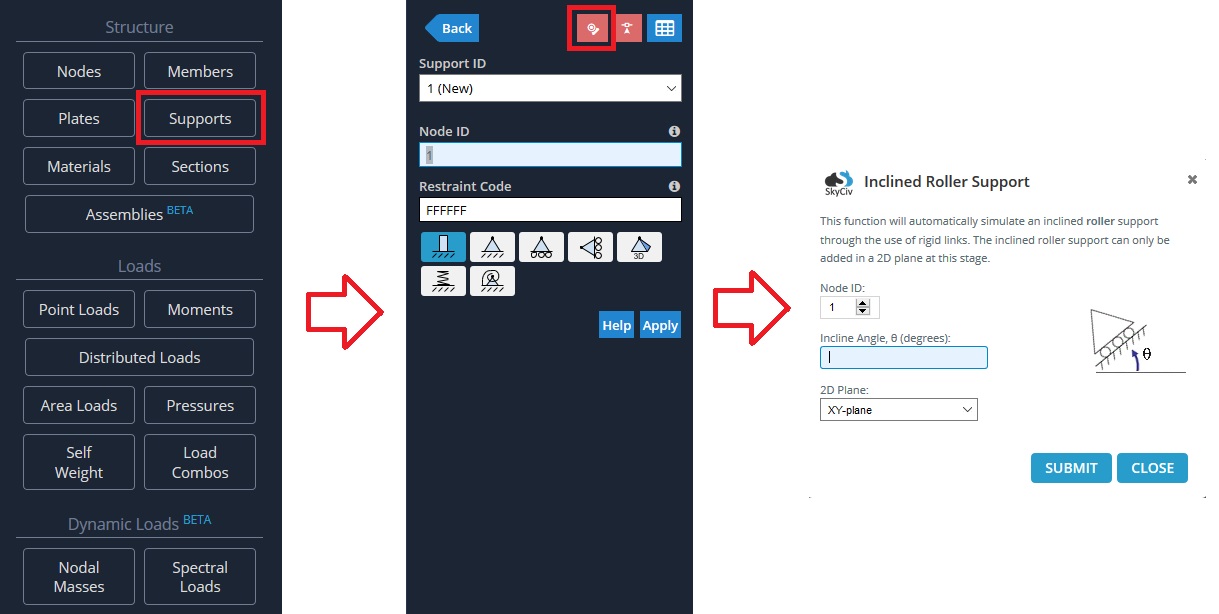 For adding a line support to the edge of a plate, follow the next steps: