Foundation is an essential element of a structure to provide overall stability by transmitting and distributing the total loads of the structure to the ground. Shallow foundations, such as rectangular or square isolated footing,  are the preferred type of foundation due to the simplicity of their construction and overall cost compared to deep foundations. Estimating the base pressure dramatically affects the design and sizing of the footing. Typically, the utility ratio between the allowable bearing capacity of the soil and the governing base pressure under the footing is the basis of the initial size of the footing. Once the initial footing dimensions are set, further design checks for safety and stability, such as one-way and two-way shear, bending capacity, and development length checks, are checked depending on which design code is used.

This article shall focus on calculating corner pressures under different zone classifications based on Bellos & Bakas (2017) and S.S. Ray’s (1995) studies.

Zone classifications of a rectangular footing

The zone classifications of a rectangular footing are derived from multiple studies by different authors to develop a practical approach to estimating the distribution of soil pressure under expected loading conditions. As shown in Figure 1, there are five different regions (Zones A-E) depending on the location of resultant eccentricity. Each zone corresponds to a different loading, base pressure distribution, and deformation. Zone C, also known as the kern, is the main core. It is the ideal region to design a footing, resulting in full compression on the footing. The dimensions of this region are equivalent to 1/6 of its respective footing length. 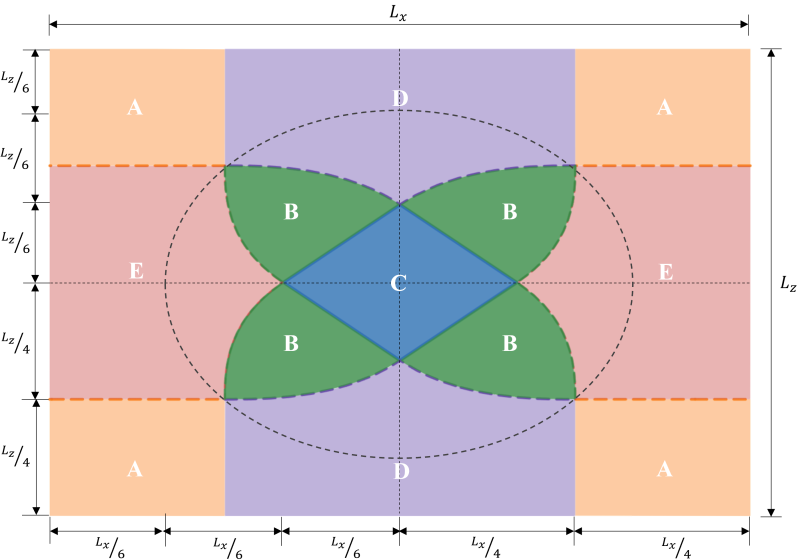 The secondary core is the elliptical area (bounded by the dashed line in Figure 1) with its major and minor semi-axes equal to 1/3 of its respective footing length. This region covers the entire zones B & C and some parts of zones D & E. Secondary core results in a partial compression of the footing. It is a good practice to maintain the eccentricity inside the secondary zone for an acceptable footing design.

Eccentricity beyond the secondary zone is the result of high bi-axial loading. It covers the entire zone A and the remaining parts of zones D & E. It is recommended to avoid designing the footing in these regions as it will have the risk of overturning. Hence, it is advisable to redesign the footing dimensions for this loading type.

The following enumerates the analytical formulas for solving the corner pressures in each zone classification.

This case corresponds to four rectangular areas in every corner of the footing. It usually occurs with large bi-axial eccentricity, imposing a high triangular compressive area in one of the corners, as shown by the shaded region in Figure 3. The remaining corners lose contact with the soil. Hence, this case is not advisable for design.

Zone D also corresponds to large eccentricities in the areas attached in the x-direction of the footing, as shown in Figure 4. The eccentricity in the z-direction (ez) is much greater than in the x-direction (ex). In this case, two corners of the footing lose contact with soil and produce a trapezoidal compressive area. Compared to zone A, which is entirely outside the secondary zone, a portion of zone D is still covered by the secondary zone.

Similar to zone D, this case also produces a trapezoidal compressive area but is caused by a large eccentricity in the x-direction(ex).

This case occurs when the applied loads on the footings generate a moderate eccentricity within the secondary zone. The areas covered by zone B are bounded by two curved sides and one flat base around the exteriors of zone C. In this case, a pentagonal compressive area is produced, and only a corner of the footing loses contact with the soil. However, the solutions provided below are slightly complex and require numerical solving methods for the corner pressures and the x & y intercepts of the compressive area. 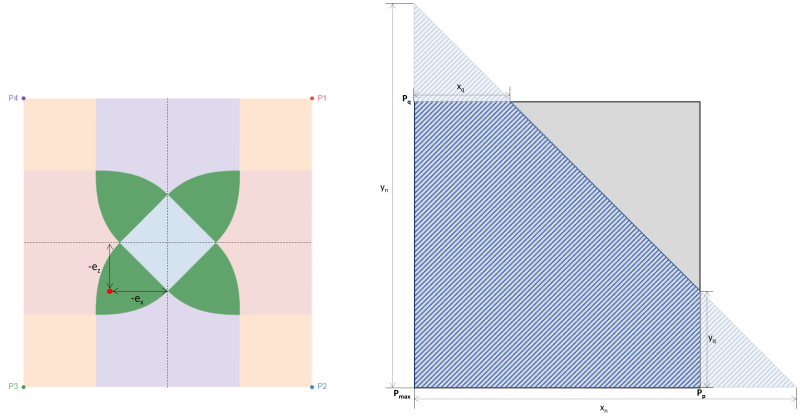 Alternatively, a more direct solution by S.S. Ray (1995) can be used for the corner pressures and intercepts of the pentagonal compressive zone. The equations are given below: 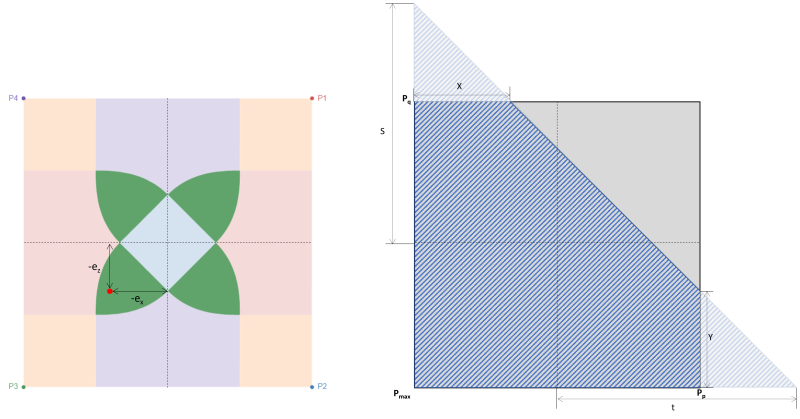 SkyCiv’s Foundation Design Module is capable of solving the base pressures of a rectangular concrete footing. Additional design checks in accordance with different design codes (ACI 318-14, Australian standard 2009 & 2018, and Eurocode) are also available.