In zones of seismic activity, construction codes such as ASCE-07 establish seismicity in terms of inertial forces. There are two main approaches to obtaining these forces, static and dynamic. This article is focused only on dynamic forces. If you need to learn how to calculate using the static procedure, we recommend you to read these articles: SkyCiv Seismic Loads Generator and SkyCiv Fully Worked Example of ASCE 7-16 Seismic Load Calculation using Equivalent Lateral Force Procedure.

A Response Spectrum Analysis (RSA) is a linear (strains directly related to stresses) dynamic procedure that uses a structure’s natural vibrations properties in order to obtain the maximum force generated in a motion seismic event. Due to this motion being transferred from ground supports to the full structure, inertial forces will be developed, that is, as Newton’s second law says, Force = mass * acceleration.  The source mass is taken from the material building and the level of acceleration has to be defined by the Code. Feel free to check a previous SkyCiv article about RSA: Introduction to Response Spectrum Analysis with SkyCiv S3D.

The following image shows a structural model rendered which consists of a low-rise steel building. The lateral resistance is provided by two different structural systems along the main directions in the plan:  concentrically braces frame for longitudinal and moment resistant frames for transverse.

You can go through the following steps to create a model and be able to run an RSA. (For more detailed tutorials regarding modeling, go to our SkyCiv documents: SkyCiv S3D Getting Started) 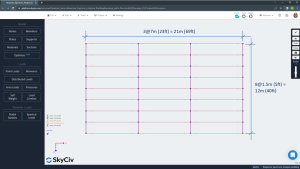 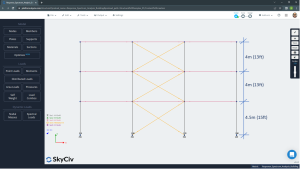 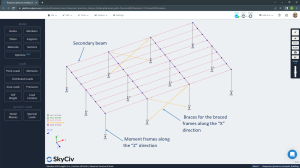 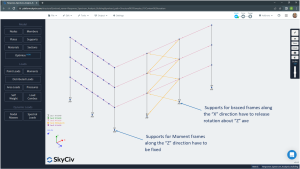 Braced frames need to accommodate rotation to develop only axial forces (tension or compression). Moment frames need fixed supports at least in their plane. The way to accomplish both requirements is by assigning a fixed degree of freedom for displacement and rotation in each direction (“x”, “y”, “z”) with the only exception of releasing the rotation along the “z” axis.  The restraint code to apply is “FFFFFR”; the first three characters for linear displacement and the last three for rotation. 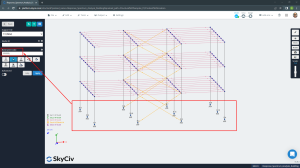 Figure No.6. Group of supports and restraint code assignment.

It is recommended to define rigid diaphragms to reduce the number of degrees of freedom to three per level, two for translational displacement and one for the rotation in the plan. 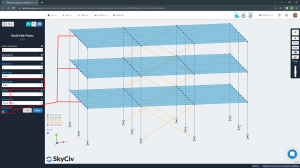 Figure No.7. Rigid diaphragms at stories.

How a rigid diaphragm constraint works is it creates a master node of reference, commonly named “Center of Mass (CM)” and links to the nodes using Rigid Links. One simple definition is the point or node in a system at which the whole mass may be considered as concentrated.  For seismic loads, lateral forces are applied to the CM. 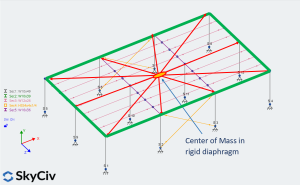 Figure No.8. Master and slave nodes in a rigid diaphragm.

The complete geometric model is shown in the figure below. 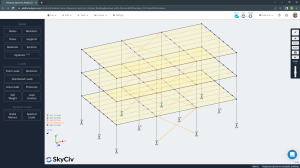 Figure No.9. 3D view of the completed model.

Adding static loads to your model

Construction codes define the loads and the way a combination of them is considered. In this article, only gravitational and lateral forces will be defined.

To define self-weight load, look at the left ribbon and select in the loads section the option “Self-weight”, then turn on clicking the button “ON”. Next, assign a value of -1 in the vertical direction (in this case is Y-axis Gravity) and finally go to apply button to create this load case. 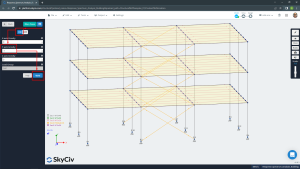 A similar procedure as we did before for self-weight load is required to assign and create user gravitational loads: 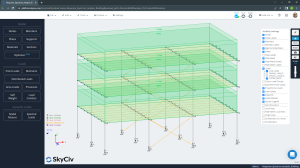 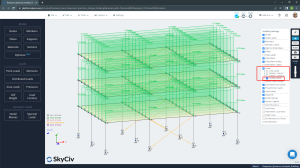 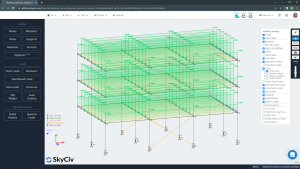 To calculate lateral seismic forces dynamically using this method (RSA) you can follow the next steps:

Most building codes have considered only as a source of mass the self-weight and superimposed dead loads to calculate seismic inertial forces. In some uncommon cases, a fraction of live loads are also accounted for. 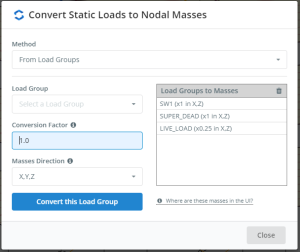 Figure no. 15. Mass sources including self-weight, superimposed dead and 25% of live load.

There are two manners to create the plot for RSA. SkyCiv S3D offers you using a user input or with a default template that includes the ASCE-07 and Eurocode 8 codes. 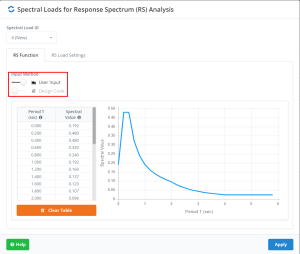 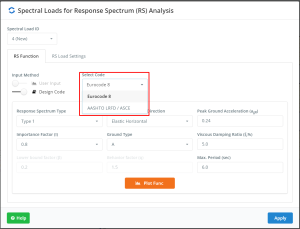 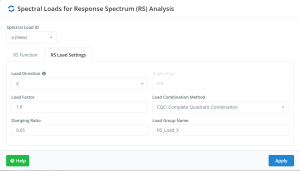 Due to the RSA being a dynamic analysis method based on the modal response, there has to be a previously defined procedure to combine these different modal responses. Most adequate methods are indicated below and is fully recommended to use the CQC method: “Complete Quadratic Combinations”. 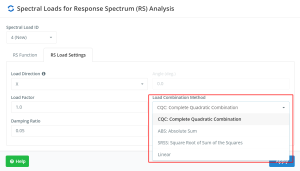 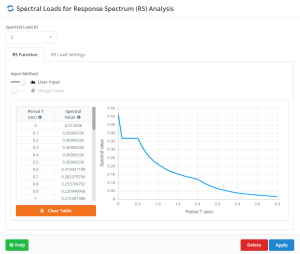 The example we’ve been working with has two different lateral resistance systems: braced and moment frames. Both systems respond inelastically in different modes so that, ductility and strength factors will modify the Reduced Design Spectrum to be used in each main direction. 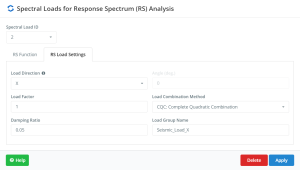 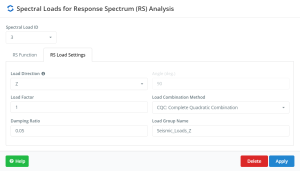 Once all dynamic properties have been defined you may run a Response Spectrum Analysis. Go to “Solve” and then select “Response Spectrum” to obtain the final results. We can review the natural vibration periods or frequencies for all modes considered in the analysis. 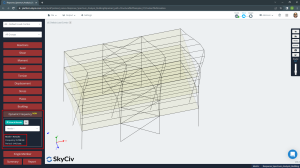 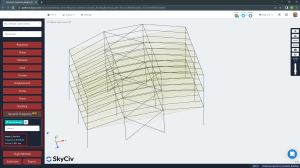 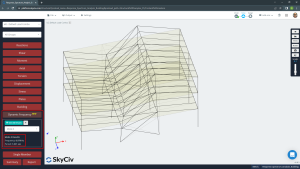 Finally, you can access tables with the RSA results. The next images show the frequencies and participation masses for all modes of vibration in the analysis. 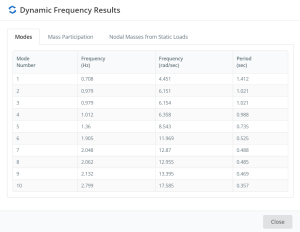 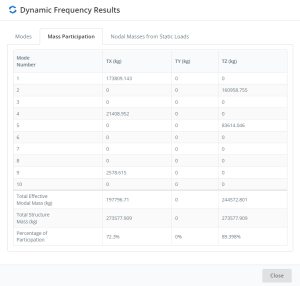 New to SkyCiv Structural 3D? Sign up today for FREE!