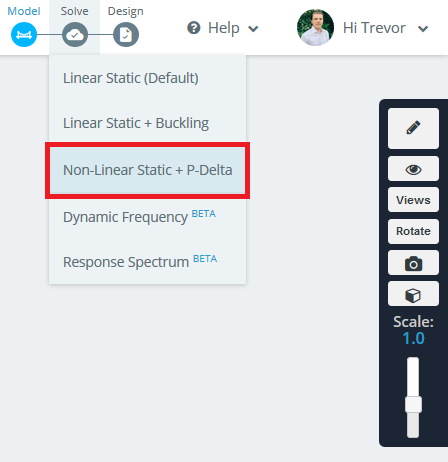 Types of Non-Linear Analysis and Effects

In the Settings of the software, you can change the Non-Linear solver settings. Choosing “Small” or “Finite” Displacement theory will have a significant effect on your results if the deflection of your structure was large.

An example of a P-Delta effect is when a tall structure is subjected to a critical lateral displacement, and due to abrupt changes in axial force distribution, an overturning moment is introduced. It is the result of the ends of the member no longer being vertical due to the lateral deflection, which introduces the secondary moment (P×Δ).

This analysis works by first performing a linear static analysis. Next, the P-Delta effects are taken into account for each member. The structure is re-analyzed and this iterative process continues until a convergence criterion is met on the displacement of the structure. The level of convergence can be set in the Settings of the software under the “Convergence Tolerance” setting and is reflected as a % error.