Para iniciar, Load Combinations can be added by clicking the Carregar Combos button within the main menu as shown: 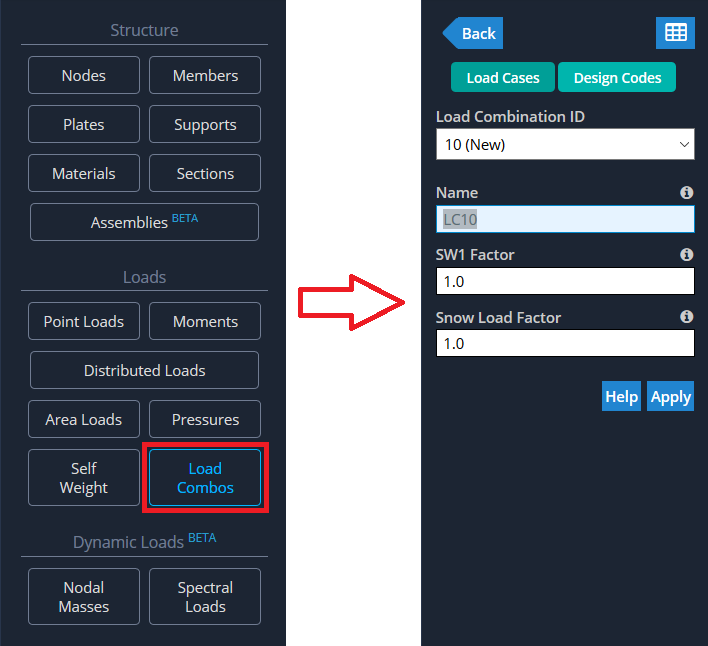 Observação: the Load Combinations window will only let you edit the Load Factors for Load Groups you have already assigned. To learn more about how Load Groups work in conjuncture with Load Cases, read the previous article about Grupos de carga.

Once you are on the load combinations menu you can add a custom name for each LC, which is given an ID, and each involved load groups contributing factor, como mostrado acima. Users can now add Load Combinations manually by entering the aforementioned fields and hitting Aplicar for each Load Combination.

Observação: Users can clear all Load Combinations using the Claro button within the Carregar Combos Datasheet.

Users can import Load Combinations from a variety of different Building Codes across the globe – ou requer entradas difíceis do cliente ou instalador, Austrália, Europe and Canada. Para iniciar, Clique no Veja como devem ser nossas atribuições button while in the Carregar Combos cardápio, as shown in the image above. A large prompt will come up where you can start editing the options to get the intended Load Combinations.

Primeiro, (shown in red below), select the governing country and the relevant design code. Então, (shown in blue below) if you haven’t already, assign specific load cases to the load groups you have applied to your structure. Finalmente, (shown in green below), toggle all or some of the Load Combinations you would like to import in the project: 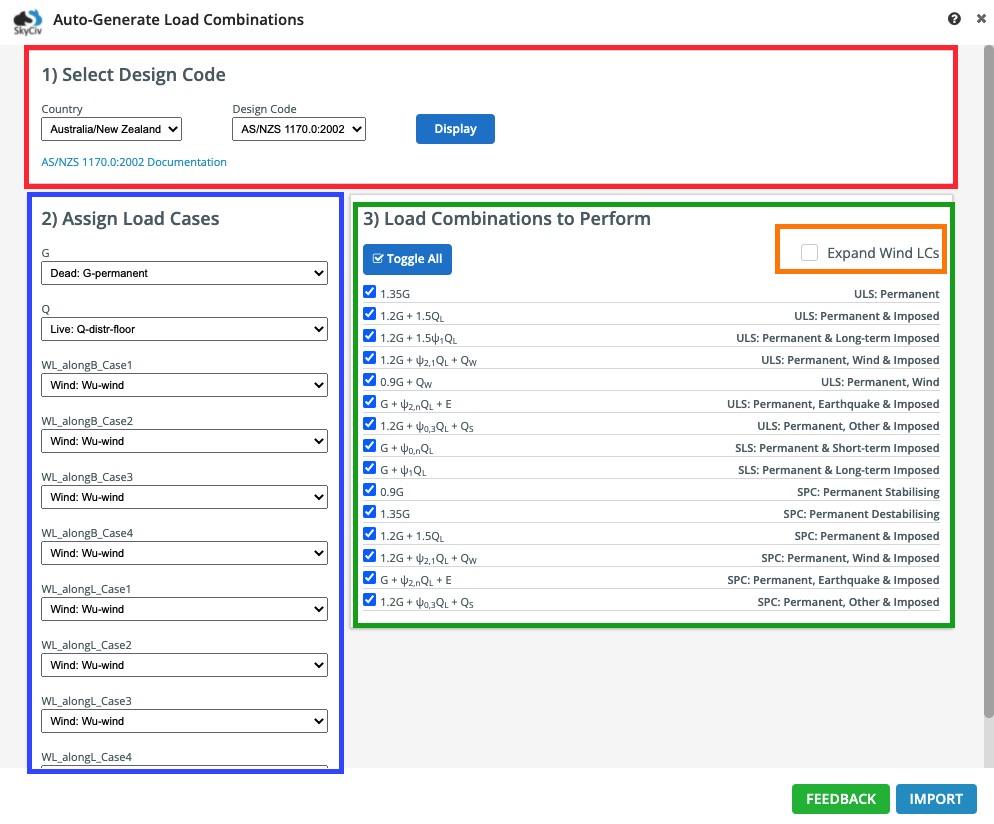 Importing/Editing Load Combinations from a Spreadsheet

Observação: The columns will need to be in the same order in the 3rd party spreadsheet as shown in Structural 3D. After pasting into the Datasheet, make sure to hit Aplicar. 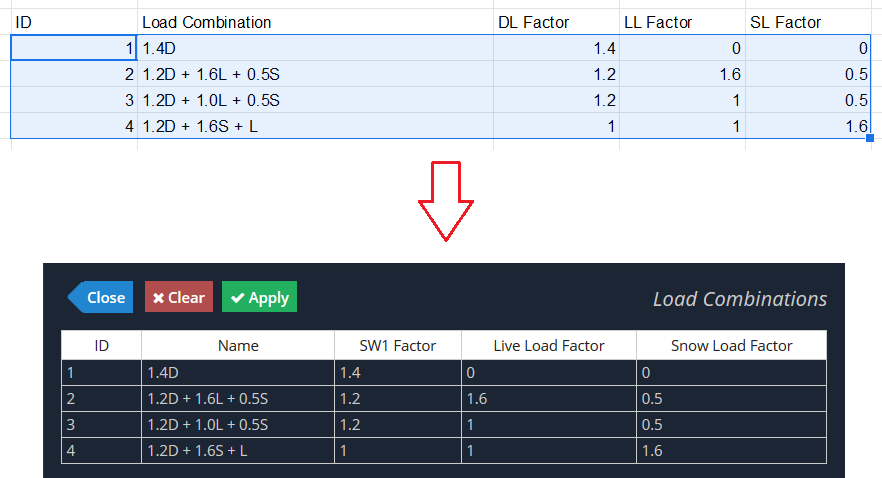 Along with your user-defined (or imported) combinações de carga, the solver will also add some envelope cases to make it easier to review the results. Envelope Load Combinations display the absolute worst case result for each member and compile them into one neat set of results. Por exemplo, say member 1’s worst shear case is 1.4D, the Envelope Case will display that result for member 1.

The software will add the following envelope cases:

Here is a sample of some of the load combinations you might expect to see returned from the solver: 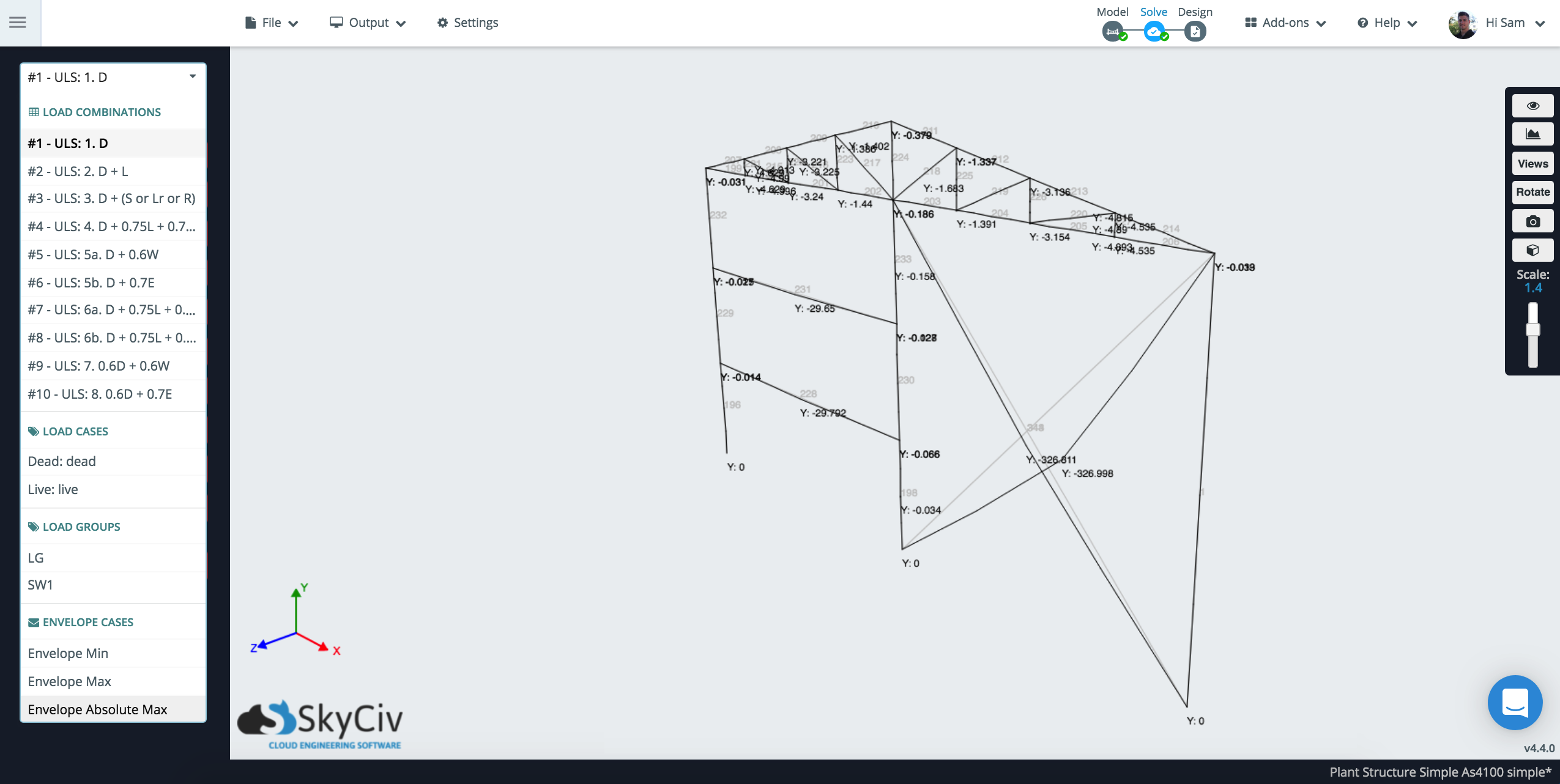