Integration between SkyCiv Structural 3D and Load Generator helps bridge the gap between load calculation and load application. With this integration, users can automatically generate loads in the Load Generator module, then apply them directly to their model in Structural 3D. This functionality is integrated directly in Structural 3D, so no need to go to any separate modules before hand. Hierop volgend, SkyCiv recommends completing the modeling stage of your structure before engaging in any Load Generator applications, as it will increase the overall accuracy of the process.

Before going into this article, SkyCiv HIGHLY recommends going through the Software Documentation on Modeling in Structural 3D, Oppervlakte & Windbelastingen, as well as be familiar with the use of the standalone Laad generator, as all of those functions are relevant. This documentation will focus on the application of the loads using the integrated version of the Load Generator while operating in Structural 3D. bijgevolg, this documentation won’t go into depth on how to calculate each individual load, as they are very reliant on which code you are using. Zoals genoemd, please go through linked documentation on the Load Generator and the prevailing building code, before going through this article.

To use the integrated Load Generator, finish modeling your structure, then go to Gebiedsbelasting on the left input tab while operating in Structural 3D. Vervolgens, click on the red Laad generator knop. 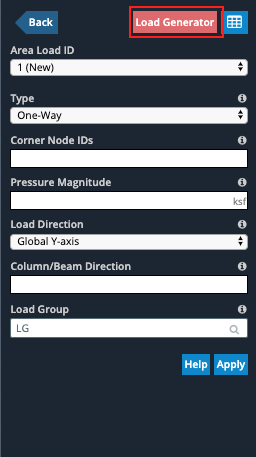 Notitie: The simpler the structure is, the easier the integrated application will be. The more complex the model, the less accurate the application of the loads will be. 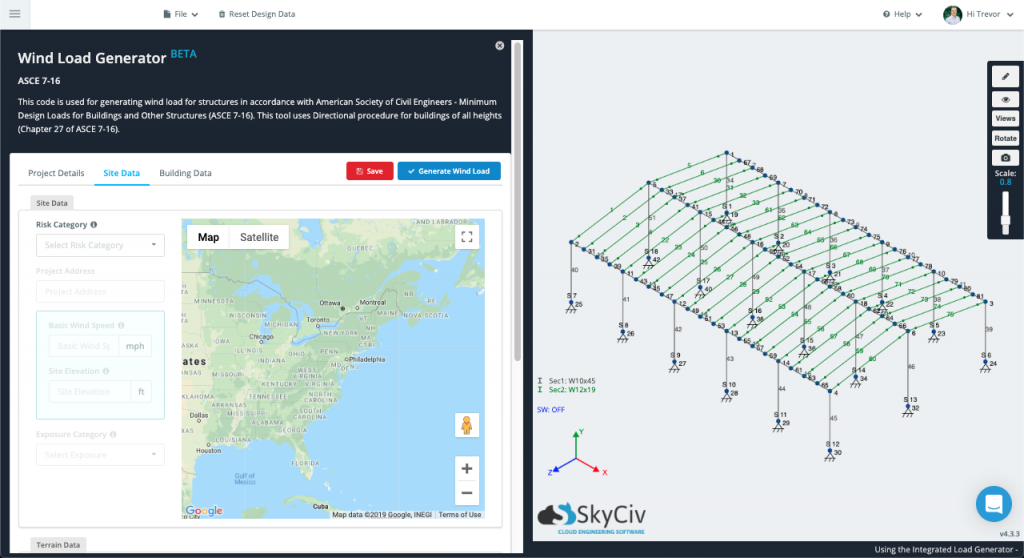 As you go through the inputs the same as in the standalone version, you will notice some things will be auto-populated, thanks to your model being present in this integrated format. Bijvoorbeeld, once you get to the Gegevens bouwen portion and have selected a few of the classification or building type options (depending on your code version), most of the building dimensions and roof angles will automatically be filled in based on the geometry of your model. Any of the fields in the Gegevens bouwen of Sitegegevens can be adjusted manually as well. 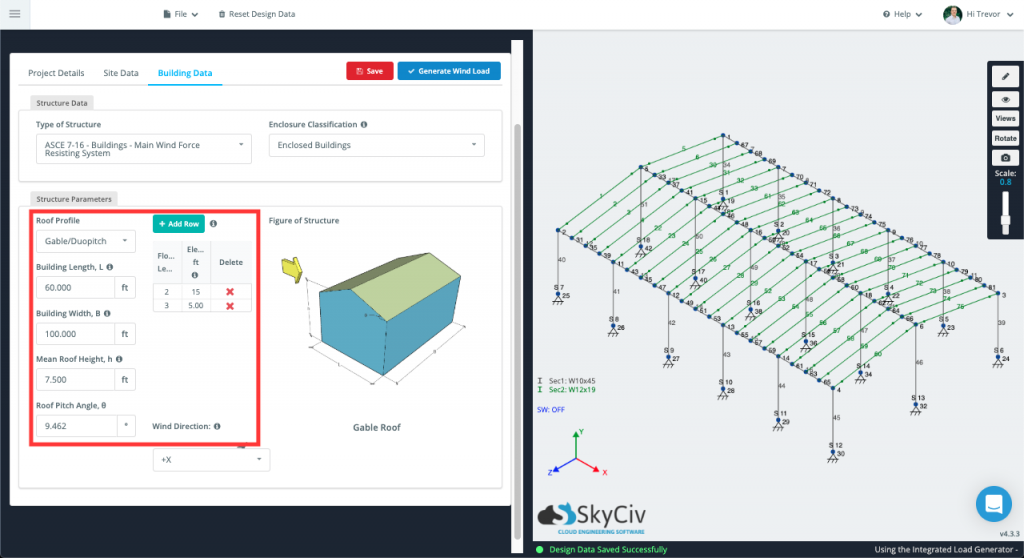 Once all of the available inputs are satisfactory, Klik op de Ladingen genereren knop. The solver will then try to take the loads that are generated from the integrated Load Generator, and apply them directly to your structure. Each pressure value according to a face of the structure (again, depending on your applicable code) will be identified by a series of nodes. These nodes are found in the Puntbelastingen zijn krachten die kunnen worden uitgeoefend op een knoop of op een punt samen met een staaf kolom, and are responsible for outlining the extents of each pressure. Any of these node sequences can be edited to apply that wind load to whichever face you want. 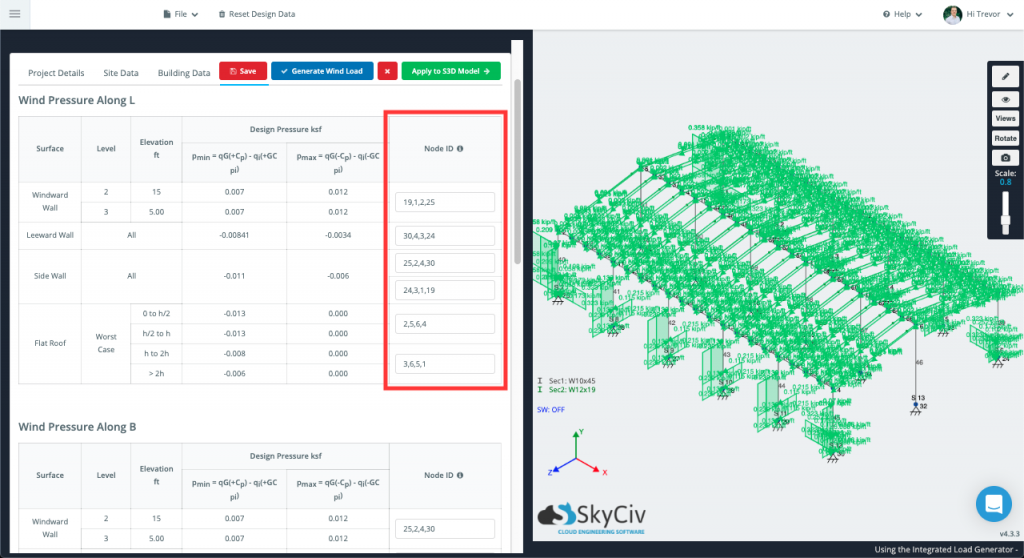 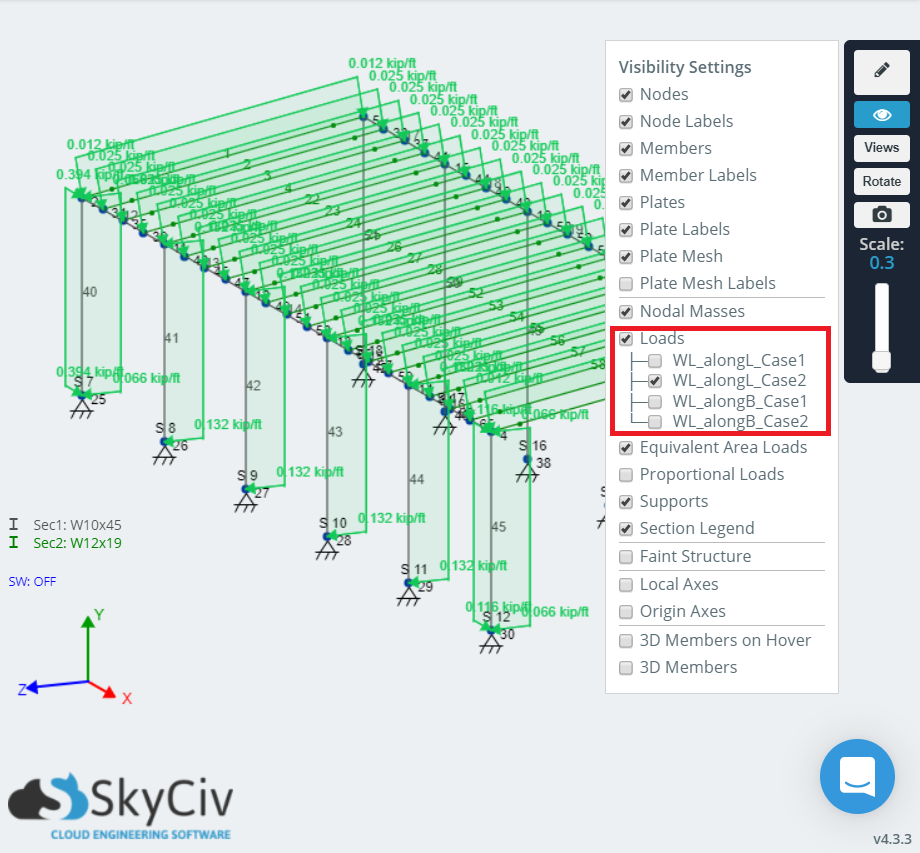 If SkyCiv’s solver was not able to create a direct link between your model and the generated wind loads, that instance will be left blank, and you will need to input these node values manually. The simpler the model, the less manually input required, en vice versa. 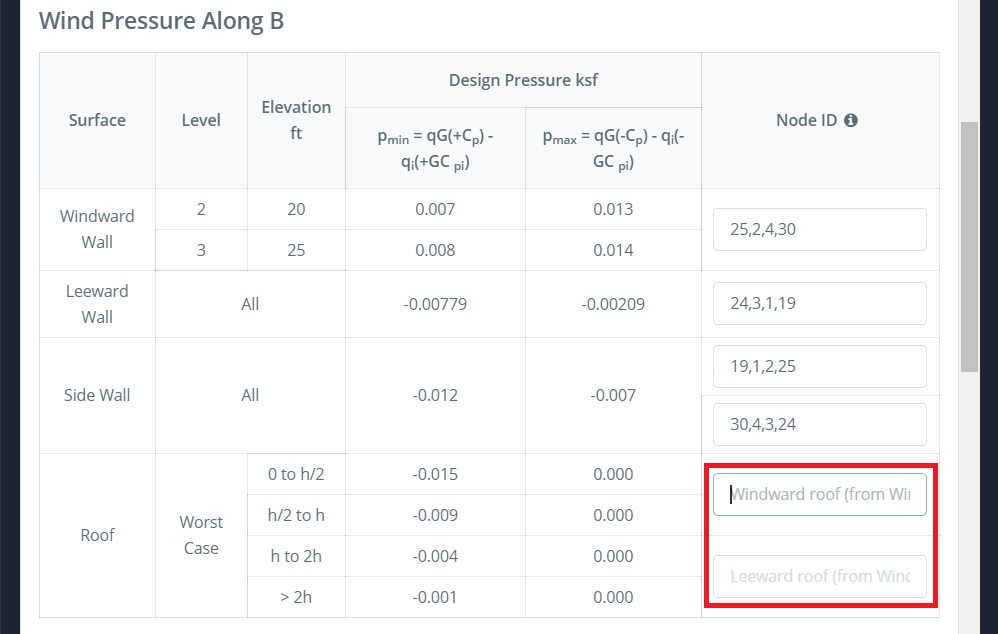 Because the generated wind loads take the form of Kolom windbelastingen, they can always be viewed and adjusted individually like any Area Load by going to the Area Loads tab on the left hand side and then clicking on the Datasheet: 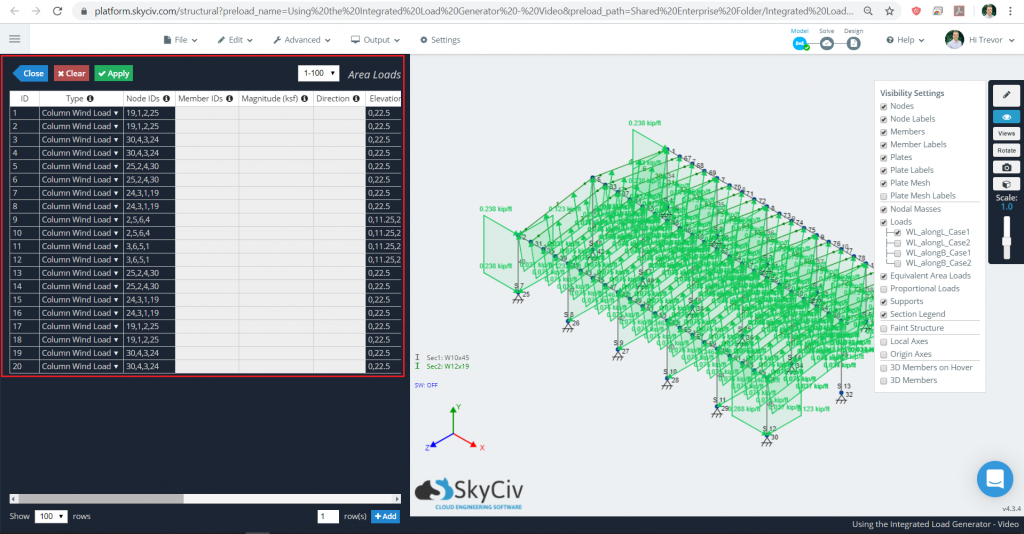 All of the generated Wind Loads take the form of Kolom windbelastingen (discussed in the Area Loads documentation) while present in Structural 3D. Door dit, the order the nodes inputted into each field DOES matter. Kolom windbelastingen distribute to their subsequent members using One-way distribution. The first two nodes indicate the Spanrichting:: basically the direction of the members constrained within the load that should see the distributed load of the member.

If at any point during the application of these automatically generated loads you want to change the underlying parameter values, or start over, you may do so. To change or reset the loads, ga naar Gebiedsbelasting > Laad generator as if you were going to apply the loads the in the first place, and you should see this message: