A "tall structure" (often referred to as "high rise building") is characteristically a building with a small footprint and roof area but a very long and tall facade. Buildings that meet these criteria are also commonly referred to as "skyscrapers". This type of structure requires special engineering procedures for its design and construction due to its height. Thanks to the growing population and increasing urbanization, tall structures are being adopted largely for residential and commercial purposes. Mostly built within dense city limits, these structures are turning into distinctive landmarks and corporate symbols for their housing cities.

There are no "absolute" criteria for considering a building tall, but according to the Council of Tall Buildings and Urban Habitat (CBTUH), the following categories may be used. First, the urban context on where the building exists. If a 10-story building is located in a central business district surrounded by 20-story buildings, then it may not be considered tall. However, if it's located in a suburban area that is predominantly low-rise, then it may be considered tall. Figure 1 depicts this idea.

Figure 1: Urban context on where the building exists

Secondly, the proportion of the height and width of the building contribute to its classification as a "tall building". Buildings that are not particularly tall relative to their overall footprint maybe not considered tall. Whereas, a building that is relatively tall but has a large footprint may not be considered tall. Figure 2 depicts this idea.

Load transfer on a tall structure can influence the ground at a greater depth and to its adjacent structures, therefore a thorough ground or site investigation must be completed during the design of the foundation. The interaction between the structure and the supporting ground must be closely evaluated by engineers during the design process. Tall building foundation design needs to capture the full impact of the structure, both above and below the ground. Before any meaningful decisions can be made, site investigations and reports must be conducted by geotechnical engineers.

Historically, foundation design is based on empirical formulas to derive approximate foundation solutions. This may result in a non-unique and conservative solution, usually over-designed and a relatively expensive foundation for the structure. In recent years, great efforts have been made to come up with modern in-situ testing methods to accurately measure geotechnical parameters for foundation design or the influence of the soil-structure interaction. The soil-structure interaction significantly affects the distribution of vertical loads on the ground, stresses in the structure, foundation design, soil settlement,  and the dynamic behavior of the structure under the effects of dynamic lateral loads such as wind and seismic events.

Once the ground conditions and site investigation have been established, a basic solution for tall building foundation design can be provided. Foundation options for tall structures range from a raft which transfers the building loads into the immediate soil layer directly below the structure, or a fully piled solution to transfer structural loads from weak layers of soils onto firmer strata, or a composite system that uses both raft and piled solutions. Such foundation types are complex and generally require more structural engineering effort than other conventional foundation systems found in low/mid-rise structures. It is also common in practice to make the foundation design a more collaborative effort with the geotechnical engineer. These different options are shown in Figure 3. 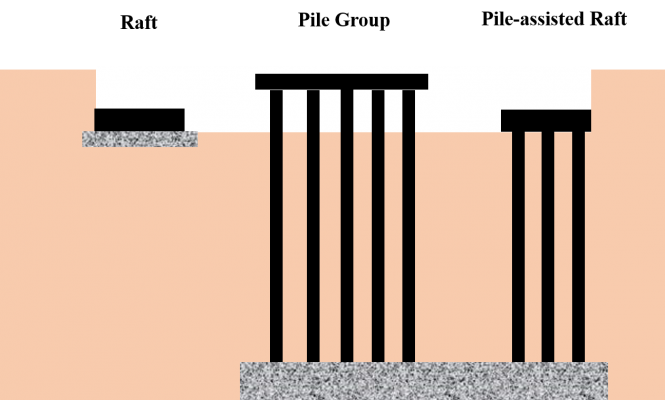 A raft foundation, also known as a "mat foundation",  is essentially a continuous slab lying directly on top of the soil that extends over the entire footprint of the building, thereby transferring its weights and the loads to the ground in a more even distribution. Unlike isolated or pile foundations, a raft foundation is often used when the soil is weak, as it distributes the weight of the building over the entire area of the building, and not over smaller zones or at individual points, which results in reduced stress on the soil. Typically, the thickness of rafts can be several meters thick to accommodate the punching-shear effect of heavily loaded columns, while adequate load spread should be ensured onto the underlying strata.

Pile foundations are commonly used for structures that lie on depths of weak or saturated soil where the excavation depth is not feasible for shallow foundations.  The load from the superstructure is transferred from the piles through the weakly compressible soil strata down to stiffer soils or hard rock. Usually, designers evaluate the use of significant groups of large diameter piles for tall structures. It should be noted that there is a difference between the performance of a single pile and a large pile group. The performance of a single pile depends on the skin friction along the shaft and the strength of the soil at the base of the pile. Conversely, for a pile group, the piles and soil enclosed by the group can act as a single unit, and the overall capacity is the sum of all the capacities of piles in the group, and it is also influenced by the spacing between the piles.