SaaS in Structural Engineering
Chances are you’re familiar with the term software as a service (SaaS). In fact, most of us have likely used such software recently, perhaps unknowingly. SaaS stands for Software as a Service and refers to the increasingly popular service of delivering a program over the internet. At SkyCiv, we explore the potential of SaaS in structural engineering. Since the global recession almost a decade ago, we have seen a significant change in the way people purchase and consume products. In the housing market, for example, the rising cost of houses has driven a significant increase in rented property. According to recent analysis from the Pew Research Center, there are now more houses being rented in the US than at any point since at least 1965. While renting is nothing new, the recent rise is indicative of the changing mindset of modern people. In 2011, TIME magazine cited the idea of collaborative consumption, which author Bryan Walsh described as “renting, lending and even sharing goods instead of buying them”, as one of the ten ideas that will change the world. This shift towards sharing products and services rather than owning them is now even reflected in the software we use. The development and viability of cloud computing has introduced the concept of SaaS, where users pay regular subscription fees for the privilege of using a program or platform. Effectively, this can bring high-quality software to individuals who previously would have been unable to afford it. Typically, most SaaS applications include technical software support as a part of the service that customers pay for. However, with subscription models entering technical fields like structural engineering, can users expect more from their subscription? SkyCiv is already exploring this idea for structural engineers. As the entirety of SkyCiv’s suite of structural design and analysis software is cloud-based, our company’s specialists can, if the user requests it, view user projects and provide more extensive troubleshooting of software problems. Under SkyCiv's higher tiers of pricing, it also allows for more engineering support. 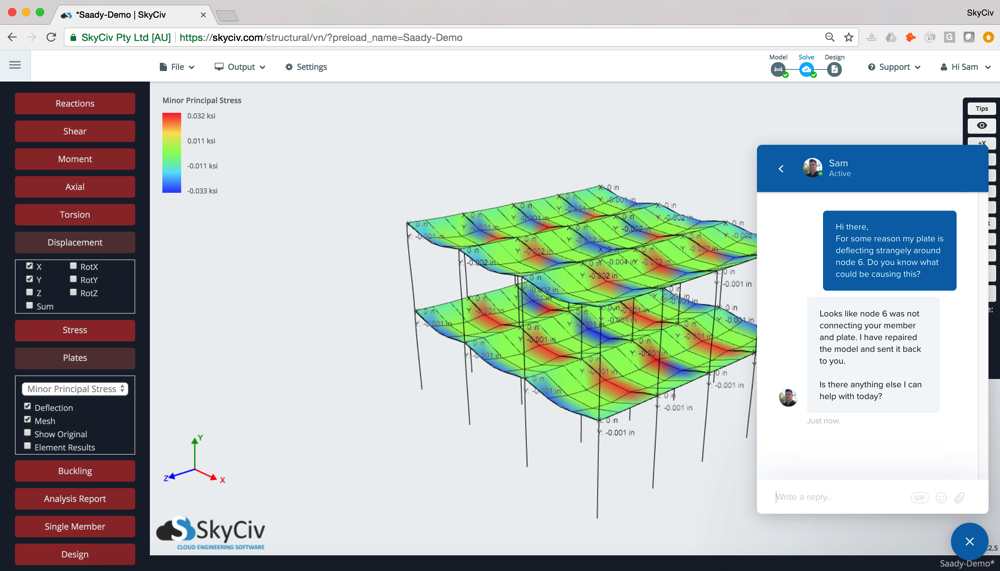 Typical service from a SaaS business model
Every member of SkyCiv’s support team is qualified in structural, civil or mechanical engineering, making them well positioned to help with any structural questions an engineer might have while designing. This may include assistance with the user’s models, troubleshooting models that won't solve and even assistance interpreting results. Crucially, this consultative help is delivered to engineers in real time because the software is browser based. Engineers can use the live chat box to open a dialogue with a member of SkyCiv’s staff and, with offices in Australia and the US, can get help at almost any time of day. In effect, we are essentially delivering structural engineering consultation as a service. With the rise of the sharing economy and SaaS, it is important that users get the most value from their subscriptions. For structural engineers, this value doesn’t just have to come from the software itself, but rather the professional consultation of specially trained experts.